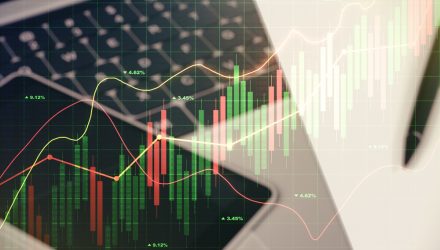 Fed tightening is on the very near horizon, with interest rate increases set to begin in March. How big those hikes will be and how many there will be this year both remain unknown, but several factors point to some potentially stable fundamentals underpinning the economy as markets brace for a rising rate environment.

The central bank has been known to raise rates rapidly in the past, but David Berson, chief economist for Nationwide, doesn’t believe that this rate cycle will be as rapid as the mid-2004 rate increases, according to a blog post on the Nationwide website. Within the course of two years, the Fed raised interest rates a total of 17 times, starting from 1.0% and stopping at 5.25% in its efforts to combat inflation and slow the economy.

Berson believes that there are some strong fundamentals that could indicate a more stable and resilient economy than some might fear. Core GDP, which saw extreme volatility during and after the initial onset of COVID and the subsequent recession, has stabilized. This could be a signal of economic strengthening and performance to come.

Omicron wreaked havoc globally in December, and reports coming out this week are expected to reflect some slight pullback but remain solidly aligned with growth. The Institute for Supply Management (ISM) just released their manufacturing report for the month, and January has reflected solid growth. The PMI, a measurement of economic growth, was down 1.2% compared to December but came in at 57.6; any reading above 50 is an indicator of growth, reports Logistics Management.

The January report is the lowest one over the course of the last 12 months, with new orders falling 3.1%, which was an expected impact of Omicron, but overall, 14 different manufacturing sectors gained in January. The six largest sectors (machinery; food, beverage and tobacco products; transportation equipment; computer and electronic products; chemical products; and petroleum and coal products) all exhibited between moderate to strong growth.

Job openings are expected to remain at record highs, indicating that labor demand continues to remain strong. With the initial jobless claims at a 50-year low in December, Nationwide is expecting job openings for the month of December to be in the ballpark of 10.5 million, which is “a small step down from November but still very high from a historical perspective,” Berson writes.

Job growth should accelerate in the next couple of months, but for January, it’s expected to remain depressed. With the labor market remaining tight, wage gains should remain strong, and Nationwide is projecting a growth of 0.6% in average hourly earnings for January, adding further inflationary pressures from increasing wages to the mix.

“The Federal Open Market Committee (FOMC) left policy unchanged at its January meeting but made it clear that it is poised to tighten policy in the months ahead,” Berson explains. “Financial markets have been coming to grips with tighter financial conditions coming soon, increasing volatility, particularly for equities. Economic growth for the fourth quarter of 2021 was strong, but the handoff to 2022 is soft.”