How Worried Are Your Clients About Inflation? Survey Says…

The Federal Reserve enacted a 0.25% interest rate increase at their meeting this week to begin combatting record inflation, but it looks to be a long road to get back to reasonable levels, with Fed expectations several years out for stabilizing inflation around 2%. 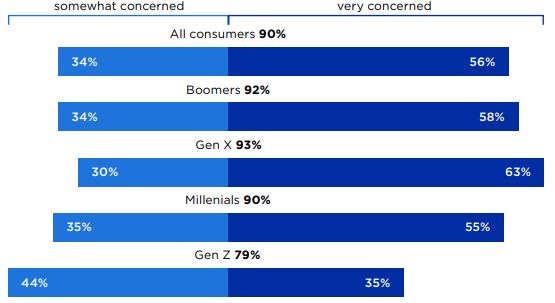 The Boomer generation has perceived their purchasing power declining the greatest, a full 77%; this is most likely due to the fact that they are the generation most heavily relying on fixed income and thereby feel the pressure most. This older generation, along with Gen X, who might have been working and spending during the last major inflationary period in the U.S. in the 1970s, also reported that they believe increased prices are going to be a long-term phenomenon.

So what kind of impacts is it having for younger generations who aren’t on fixed income yet but are feeling the squeeze in their everyday spending? Inflationary pressures have translated to Gen Z consumers largely delaying major life events such as buying a home, starting a family, and retirement plans. All of these delays could have long-term implications for their finances, and are something that advisors should be aware of when discussing retirement planning.