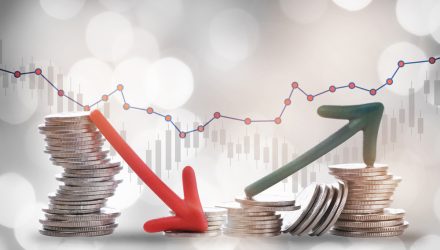 There’s no doubt that 2022 has been a trying economic environment for consumers and investors alike. Although there’s been considerable debate regarding whether or not the U.S. economy is in a recession, there’s no denying that interest rates are moving higher, and inflation resides at four-decade highs.

As a result, related data points for 2022 could be solid before potentially succumbing to headwinds in 2023.

“Consumer trends remained solid into the fourth quarter, supported by strong job and wage growth. But many businesses are anticipating lower sales and production ahead, which should reduce hiring over the next year — weakening the tailwinds for consumer activity,” according to Nationwide Economics.

Following six interest rate hikes in 2022, there’s some optimism entering 2023 that the Federal Reserve will be able to relent on those increases or even engage in rate cuts. The latter scenario is arguably optimistic, particularly when considering that inflation is still high and that it takes months for rate hikes to bear fruit, which is to say that the Fed’s most recent increases likely aren’t yet paying dividends.

In fact, some experts argue that the Federal Reserve won’t have the luxury of lowering rates in 2023 and that it may have to continue boosting borrowing costs.

“Interest rates should also move higher with the Fed warning that it might implement more tightening than previously estimated in 2023 to bring inflation back to trend, adding to worries that restrictive monetary policy will soon push the economy into a recession,” added Nationwide Economics.

Translation: More interest rate volatility could be in the offing in 2023.

“Interest rates remain volatile while moving steadily higher, swung by shifts in expectations for Fed rate actions and incoming inflation data. While Fed rate hikes should downshift in coming meetings, the terminal policy rate over 2023 could be higher and more restrictive for growth,” concluded Nationwide Economics.

It’s possible that labor market contraction, which is starting in earnest in recent weeks due to a spate of layoff announcements, could hold the Fed back from raising rates next year, but that doesn’t qualify as a soft landing. Nor does it qualify as a desirable scenario.

This article was prepared as part of Nationwide’s paid sponsorship of ETF Trends.

Nationwide Fund Advisors (NFA) is the registered investment advisor to Nationwide ETFs, which are distributed by Quasar Distributors LLC. NFA is not affiliated with any distributor, subadviser, or index provider contracted by NFA for the Nationwide ETFs.

Nationwide, the Nationwide N and Eagle and Nationwide is on your side are service marks of Nationwide Mutual Insurance Company. ©2022 Nationwide.

Information on this site should not be used or construed as an offer to sell, a solicitation of an offer to buy, or a recommendation for any product.