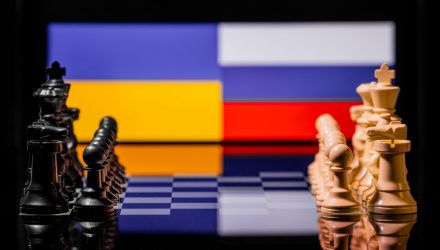 Russia’s invasion of Ukraine has shifted investors’ primary fear from the Federal Reserve to geopolitical risk as tensions between NATO countries and Russia over Ukraine have fueled the latest bout of market volatility. According to a recent Gallup survey, 75% of investors worry about geopolitical risk.

Unfortunately, since geopolitical risks are impossible to accurately model, they often lead to emotional swings in global equity values, writes Mark Hackett, chief of investment research for Nationwide’s Investment Management Group, in a recent blog. So, economists Dario Caldara and Matteo Iacoviello of the Federal Reserve Board of Governors have created a new way to measure adverse geopolitical events by tallying newspaper articles covering geopolitical tensions and examining their evolution and economic effects since 1900.

This metric, the geopolitical risk (GPR) index, spiked around the two world wars, at the beginning of the Korean War, during the Cuban Missile Crisis, and after 9/11. The most recent reading was 109 in January, but it will most certainly surge in February due to the focus on Russia, Ukraine, and to a lesser degree, China and Iran. 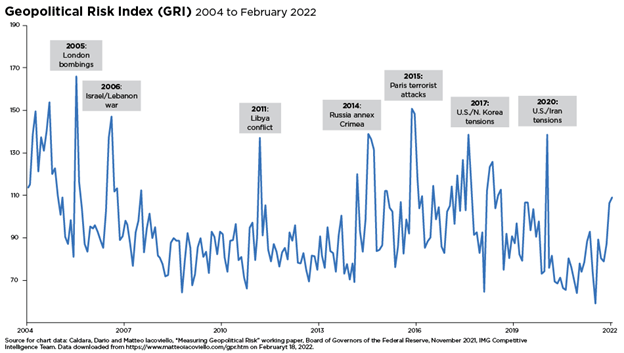 There have been seven events that led to the index spiking above 130 since 2004. These spikes were relatively minor compared to 9/11, which showed a spike to 513, and the 1991 Gulf War, which went up to 379. These events caused market disruption and volatility, with the S&P 500® Index roughly flat over the subsequent six months. In all but one instance — Russia’s annexation of Crimea in 2014 — the S&P 500 was higher in the 12 months following the spike by an average of 8%.

“Investors should remain vigilant and informed in the face of uncertainty, though reactive and emotional actions are rarely an advisable investment strategy,” writes Hackett.

Investing in volatile markets driven heavily by negative sentiments can be difficult for advisors. Nationwide offers a line of actively managed ETFs for advisors that cater to a range of investment exposures and strategies for those seeking retirement income options for their clients in the midst of changing market conditions.