You are at:Home»Retirement Income Channel»Europe’s Performance Potential for Second Half of Year 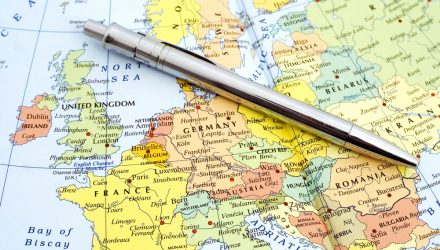 Europe’s Performance Potential for Second Half of Year

U.S. stocks are proving to be solid performers in the first half of 2021, but with the second half nearly here, investors may want to look abroad. Investors, including retirees seeking income and international diversification without excessive risk, can consider European equities.

While Europe has experienced some hiccups with its vaccine rollout, there are signs European countries are getting on track, and that could prop up the case for the WisdomTree Europe Quality Dividend Growth Fund (NYSEArca: EUDG) as a second-half idea.

Adding to the allure of EUDG is that markets seems to be pricing in a transition in leadership to European stocks from their U.S. counterparts. The runway for the former could be lengthy.

“The new economic cycle has seen stock market leadership pass from the U.S. to Europe. European countries are only now starting to ease their restrictions on economic activity just as Europe’s largest-ever stimulus plan is about to be deployed,” according to the Schwab Center for Financial Research. “This suggests eurozone growth still has some way to go before peaking, and that eurozone stocks likely can still deliver further gains after outperforming in the first half of the year.”

As its name implies, EUDG is a dividend growth idea, making it appropriate for retirement investors looking for income and some diversification away from domestic equities. With its focus on payout growth and a dividend weighting methodology, EUDG is a quality idea that eschews volatile dividend-paying names and high-dividend fare that can be susceptible to negative dividend action.

EUDG allocates 14% of its weight to Swiss stocks, which are already delivering dividend growth this year. With market observers forecasting a rebound in broader Eurozone dividends this year, Germany and France – the region’s two largest economies – are likely to get in on the dividend recovery act. Those countries combine for a third of EUDG’s weight.

In addition to income, EUDG offers credible positioning as a Europe catch-up play.

“Ending restrictive lockdowns, ramped-up bond buying by the European Central Bank, and the nearing rollout of Europe’s largest-ever stimulus plan should aid growth heading into the second half of 2021,” adds Schwab. “This could mean the peak in eurozone economic momentum may not come until later this year, unlike other major economies such as the United States, where growth may have peaked in the second quarter.”