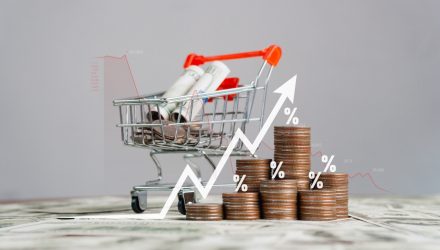 The bear sentiment that is being seen in markets of late could be partially driven by the no-win situation investors feel themselves to be in when it comes to the wellbeing of the U.S. consumer, believes Mark Hackett, chief of investment research at Nationwide’s Investment Management Group.

The U.S. consumer is responsible for over 70% of the U.S. GDP. With the Federal Reserve beginning quantitative tightening this month as well as likely raising interest rates by another 50 basis points, attention has pivoted heavily to how the U.S. consumer will respond in an inflationary environment alongside rising rates.

It’s a difficult situation because if consumers prove able to withstand price increases, it could lead to longer, more persistent inflation, but if consumer demand falls due to rising prices, the concern then pivots to rising unemployment, an economic slowdown, or possibly even a recession.

While tailwinds exist overall right now for consumers in the form of increased wages and a strong labor market — 2 million jobs were created through May of this year — inflation headwinds in the form of price increases in almost all areas related to consumption could have serious repercussions.

“According to Strategas, combining the year-over-year percentage change in costs for food at home, mortgage rates, and gas prices shows that consumer wallets haven’t been as stressed as they are today since the 1980s. What’s more, only two periods saw higher readings, both of which resulted in recessions,” Hackett explained.

Consumers Are Already Feeling the Squeeze

As consumers are forced to spend more on basic utilities such as food, energy, and housing, discretionary spending slows, a trend that is already being reported by major retailers such as Walmart, and even Dollar General. The first three months of 2022 saw consumers spending 6% less at retail stores than the same period in 2021.

“Therefore, with inflationary pressures challenging the consumer and budgets being crowded out by higher food, housing, and energy costs, investors should recognize the emergence of a less confident, more price-sensitive consumer with inflation most likely remaining elevated for the foreseeable future,” Hackett wrote.

It’s a challenging time for consumers and for advisors who are seeking retirement income options for their clients who are feeling the price increase squeeze happening in all quarters of their lives. With the fixed income space facing prolonged challenges this year with rising rates and quantitative tightening, some advisors and investors are turning more heavily towards equities to seek income.

Nationwide offers a variety of actively managed ETFs within equities for advisors. These funds cater to a range of investment exposures and strategies, all seeking income generation with a measure of downside protection within the major indexes.