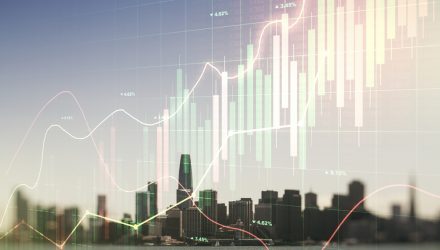 Following a modest loss by the S&P 500 in September and amid escalating concerns that the current bout of inflation could prove more persistent than transitory, it stood to reason that investors may have been short on optimism coming into October.

However, that might be starting to change for the better as third-quarter earnings season ramps up. Reportings by major banks have been enough for the S&P 500 to again inch toward record highs, suggesting that stocks are resilient and indicating that more upside could be on the way as other sectors step into the earnings confessional.

“Equity markets continued to demonstrate tremendous resiliency, with a recovery from the sluggishness in September bringing the S&P 500 Index to within 2% of a fresh record high,” says Nationwide’s Mark Hackett. “The S&P 500 delivered its best week in nearly three months on encouraging earnings data and despite continued pressure on a number of fronts, including supply chain, inflation and commodity pressures.”

As Hackett notes, there is budding optimism as earnings season gets going, and for now, that’s mostly attributable to big banks.

“Last week was dominated by large bank results, providing an optimistic outlook for consumer spending. Citi reported credit card spending up 24% from a year ago and well above pre-pandemic levels, with credit and debit card spending up 26% at JPMorgan and 21% at Bank of America,” Hackett says.

While that’s just one sector, the aforementioned data points are relevant as 15% of S&P 500 member firms deliver earnings reports this week. With earnings easily topping estimates through the first two quarters of this year, investors, knowing that 2020 provided easy comps, are eagerly awaiting fourth-quarter guidance from companies to gauge for how long the earnings momentum could last.

“Consolidated earnings growth is now forecast to grow 30%, better than the 24% expected at the end of September, but slower than the 87% recorded in the second quarter,” adds Hackett.

Adding to the potential for more near-term ebullience is the return of buy-the-dip and a stable yield curve.

“The yield curve is flattening, with long-term rates stable and short-term rates jumping on a reset of FOMC expectations following the minutes from the recent FOMC meeting,” notes Hackett. “Low global rates have been a governor on domestic rates, but global rates have recently began moving higher, driven by comments from BOE Governor Bailey saying that monetary officials need to prevent higher inflation expectations.”