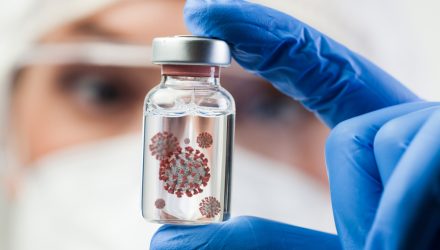 The world has been dealing with the Delta variant of the coronavirus for at least a couple of months, and in the U.S., equities continue grinding higher while the world’s largest economy is growing.

This is happening against the backdrop of rising inflation and typical seasonal challenges for stocks, but that doesn’t mean that market participants should ignore the potential impact of the Delta variant.

“The rise of the Delta coronavirus variant threatens to derail the impressive economic recovery as individuals increasingly stay home to avoid infection. Reported cases are at the highest level since February, the positivity rate is at the highest level since January, and hospitalizations are up nearly six times over the past two months,” notes Nationwide’s Mark Hackett.

Still, there’s a tug-of-war for investors to contemplate. The Food & Drug Administration (FDA) recently approved Pfizer’s (NYSE:PFE) COVID-19 vaccine, prompting speculation the Moderna (NASDAQ:MRNA) equivalent isn’t far behind. On the other hand, it’s now clear that folks will need boosters of those vaccines, and that process could possibly continue if other variants emerge.

Investors may want to consider data that confirm that the Delta variant is already having an economic impact which is, unsurprisingly, negative.

“Two weeks ago, restaurant activity had improved since last February to be within 2.4% of its pre-pandemic level, but is now down 4.3%. The biggest gap is at the workplace; travel to work is down 26% from the pre-pandemic level with no noticeable improvement over the past year. Several prominent companies, including Apple and Facebook, have pushed back their return-to-office plans until at least next January,” adds Hackett.

Fortunately, widespread shutdowns aren’t being revisited in the U.S., but if that scenario comes to pass, the economy would likely be vulnerable.

“The trend toward voluntary lockdowns threatens to derail the economic expansion,” concludes Hackett. “The Atlanta Fed’s GDPNow model currently forecasts Q3 growth of 6.1%, below the consensus of economists and slower than the 6.5% annual growth rate posted in Q2. A slowdown in the economy is not priced into markets, given the 20-times earnings multiple for the S&P 500® Index. Disappointing growth could lead to a fresh round of equity market weakness.”