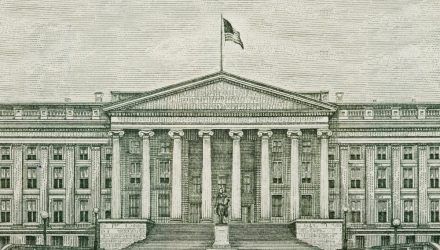 There are plenty of contentious debates to be dealt with on Capitol Hill, one of which is the debt ceiling.

In theory, uncertainty surrounding this government showdown should roil markets. It did a decade ago when the issue was front and center. After all, the debt ceiling is the legislative limit on debt the Treasury can incur.

“Legislative” is the operative word in that definition because that means Congress sets the debt ceiling and, well, let’s just say that the two political parties have some difficulty seeing eye-to-eye on things these days. Over the near-term, fixed income investors will want to stay abreast of how the two parties grapple with the debt ceiling issue.

“There were media reports that Treasury Secretary Janet Yellen recently warned House Speaker Nancy Pelosi that lawmakers have until some point in October to raise the debt ceiling before the Treasury exhausts its accounting gimmicks,” says Moody’s Investors Service. “Lawmakers will raise the debt ceiling, but the next several weeks could be dicey in the bond market because of political hand wringing about the debt.”

The potential for the debt ceiling to roil bond markets comes as Treasury yields are depressed, implying limited upside for bond investors going forward. Additionally, credit spreads are narrow, meaning that bond investors aren’t getting much compensation for taking on added risk. In other words, fixed income investors are already dealing with a lot this year. Fortunately, at least for the time being, bond markets aren’t too jittery about the debt ceiling.

“The bond market is showing a little angst about the debt ceiling. This isn’t surprising, but it’s important to note that the amount of concern is small because the bond market has been through numerous debt-ceiling episodes and knows how it will play out—the debt limit will ultimately be raised,” adds Moody’s. “Currently, all Treasury bills from late October to November—the likely drop-dead date for raising the debt ceiling—are trading a touch cheaper than other Treasury bills. This is similar to what has happened leading up to prior debt-ceiling drop-dead dates.”

“Lawmakers need to get moving on this. Democrats may include a debt limit suspension in the upcoming continuing resolution, which would fund the federal government beyond this fiscal year, avoiding a government shutdown,” concludes Moody’s.