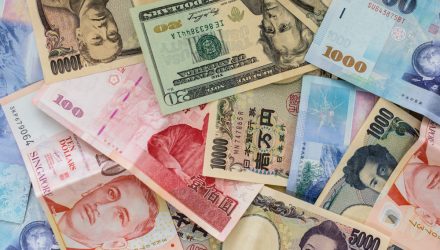 Amid low domestic bond yields, advisors and investors are being compelled to get creative when it comes to generating fixed income.

That effort can include emerging markets sovereign debt, which is accessible via an array of exchange traded funds, including the VanEck Vectors Emerging Markets Local Currency Bond ETF (NYSEArca: EMLC).

“This sector has attracted investors’ capital as interest rates have trended lower. Exchange-traded funds belonging to the emerging-markets bond and emerging-markets local-currency bond Morningstar Categories have seen combined inflows in nine of the past 10 calendar years, amassing $29.4 billion in net inflows over that span,” notes Morningstar analyst Neal Kosciulek.

EMLC: Attractive Income, but Not a Free Lunch

In financial markets, there are always trade-offs and emerging markets debt is a prime example. Yes, investors can find higher yields here relative to domestic bond strategies, but those lofty yields often come by way of lower credit quality.

“Bonds issued by emerging-markets governments carry additional credit risk relative to developed-markets sovereign bonds because there is an increased amount of uncertainty surrounding their ability to honor their obligations,” adds Kosciulek. “The uncertainty is driven by numerous factors, including the ability of the state to extract funds from its populace and to manage its finances responsibly (especially from the perspective of an international investor).”

Said another way, it’s a lot riskier to hold bonds issued by South Africa or Indonesia than it is to own U.S. Treasuries. There’s also currency risk.

Research indicates “that currency exposure accounted for 70% of the volatility Barclays Bloomberg Emerging Markets Local Currency Liquid Index experienced between 2010 and 2019,” according to Kosciulek.

For now, EMLC capitalizes on that scenario because the dollar is weak and commodities prices are rising, supporting many emerging markets currencies.