You are at:Home»Retirement Income Channel»Are We Heading for a Second Wave of Lockdowns? 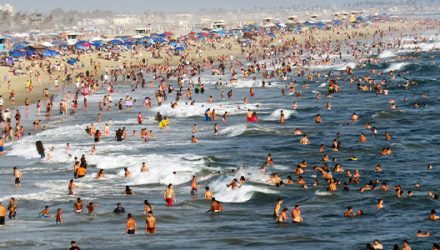 Are We Heading for a Second Wave of Lockdowns?

“I cannot emphasize how important this could be.”

That’s Dr. Sam Parnia, a doctor and professor at the Grossman School of Medicine at New York University. What he was reacting to is news that a cheap drug, dexamethasone, has reportedly been shown to reduce deaths among COVID-19 patients on ventilators by as much as one-third.

“It’s a huge breakthrough, a major breakthrough,” Dr. Parnia said of the study conducted by scientists at the University of Oxford.

The 60-year-old anti-inflation medicine is manufactured by a number of companies, including Mylan and Merck, and is widely available in pharmacies and hospitals around the world.

The discovery—if it’s everything the researchers say it is—comes just as new coronavirus cases and hospitalizations are spiking again in several countries, including the U.S.

California, which now requires mask-wearing outside of the home, had its biggest one-day jump in infections. Arizona, Florida and Texas are also turning into new hotspots.

The threat is such that some companies are closing stores again after reopening. Apple announced it would be closing 11 locations in Florida, North Carolina, South Carolina and Arizona.

Our hometown of San Antonio recently had its largest one-day caseload, and hospitalizations are on the rise, particularly among veterans. On Friday, the Audie L. Murphy Memorial Veterans Hospital, not a 10-minute car ride from our office, reported its highest number of coronavirus inpatients since the crisis began.

Fear and Loathing in the Age of COVID-19

The data is scary and can be paralyzing—if you let it. As I’ve said a number of times, it’s important to keep things in perspective while also being smart and cautious. The average age of death in confirmed COVID-19 cases is 82, according to figures from Massachusetts, and San Antonio’s data appears to bear that out as well.

Below are COVID-19 cases and deaths in San Antonio by age. As you can see, people under the age of 49 make up a vast majority of total infections in the city, and yet they represent a very small fraction of deaths due to coronavirus-related complications. Meanwhile, the group with the most deaths are those aged 80 to 89, even though they have 13.5 times fewer cases than the 20-to-29 bunch.

But even if an older person contracts the virus, it’s not automatically a death sentence. Of the 103 San Antonians aged 80 to 89 who tested positive, only 22 died as a result, or a little more than one in five.
I understand this is an uncomfortable subject, and I don’t mean to minimize the risk. My intent is simply to share the facts so we can better manage our expectations.

We fear what we don’t understand, and fear often triggers us to make decisions we later regret. Nearly one-third of investors at Fidelity who were over the age of 65 sold all of their stocks between February and May. Tragically, many got out right at the bottom. Think of Warren Buffett, who turns 90 in August. He unloaded his entire airline holdings soon before they began to take off.

Vacation, Had to Get Away

The U.S. isn’t the only country that’s reopening, of course—a fact that can easily be seen by the sharp rebound in global fossil fuel emissions. After falling as much as 17 million metric tons per day by early April as world governments enforced lockdowns and travel restrictions, emissions have crept back up and are presently down about 4 million metric tons from the pre-pandemic period.

People are beginning to travel again and go on holiday. According to the Transportation Security Administration (TSA), more than 590,000 people boarded commercial airlines on June 21, marking a new high in the coronavirus era. Last week Hong Kong Disneyland reopened for the first time since January, following the opening of Shanghai Disneyland last month.

Elsewhere in China, a coronavirus outbreak in Beijing has been “brought under control,” according to the country’s chief epidemiologist, by locking down residential areas and schools.

Like the U.S., India is seeing a surge in coronavirus cases and—again, like the U.S.—has no plans to institute another lockdown. Some 12,880 people tested positive last Thursday, a record one-day number. Instead of locking down the Indian economy, Prime Minister Narendra Modi is encouraging people take up yoga to build a “protective shield” against the virus.

This made me wonder how the virus might impact the upcoming Indian wedding season. As I’ve written about many times before, the $50 billion Indian wedding industry is a huge source of global gold consumption, as weddings are considered an auspicious time to give and receive gifts of gold. Gold jewelry, in particular, is often an essential part of the dowry.

Indian weddings have a long history of being grand affairs, with attendance sometimes reaching into the hundreds and even thousands, the total cost into the tens of thousands.

But with many popular venues limiting wedding sizes, Indian couples are postponing tying the knot at a record rate.

What does this mean for the gold market? I’ll give you my thoughts in a special Frank Talk later this week, so make sure you’re subscribed.

Holdings may change daily. Holdings are reported as of the most recent quarter-end. The following securities mentioned in the article were held by one or more accounts managed by U.S. Global Investors as of 3/31/2020: Merck & Co Inc.