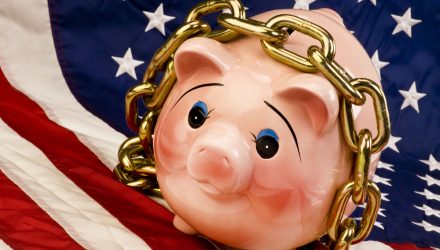 Debt on a personal level is a complex mechanism. It can provide benefits, like building credit or long-term investments such as buying a house to build wealth over time. However, it can also come with negative consequences such as taking on too much risk or creating a debt imbalance. On a national level, that complexity gets compounded, and the impact of national debt on economic growth is something that economists have been arguing about for decades.

Government spending is always a balancing act between short-term impacts and long-term ones, and it can be highly situational. Take the COVID-19 stimulus in 2020 that lessened the impacts of an economic shutdown for households and helped drive demand and a 5.7% growth rate for 2021 but has also been a contributing factor to inflation, explained Mark Hackett, chief of investment research for the Nationwide Investment Management Group, and Ben Ayers, senior economist at Nationwide Economics, in a Nationwide blog post.

“Increased federal expenditures can boost current real GDP growth by adding more capital for consumers and businesses to spend and invest,” wrote Hackett and Ayers. “Depending upon the form of spending, added fiscal spending can add to medium to long-term growth too, usually centered on infrastructure investment, schooling, or systems that increase the future productive capacity of the economy.”

The U.S. has been adding to its national debt for years through federal budget deficits, which can curtail long-term economic growth as money in the future will be needed to pay off the growing debts of today and recent years. Economic theory hypothesizes that when the scales tip so that national debt surpasses GDP, economic growth is affected. What’s more, as debt increases, it becomes harder for the government to find someone to buy its debt issuance.

“The U.S. is not at these levels yet, but the current projections from the Congressional Budget Office show that it could be within a decade under current law,” the authors explained.

The Impact of Interest Costs

There are many schools of thought amongst economists as to whether a debt threshold exists or not, and if not, what factors actually do slow growth, but the Federal Reserve has shed some light on the topic, finding that increasing debt slows economic growth because it crowds out the private sector and reduces investor confidence in owning instruments of U.S. debt.

“When the government borrows in financial markets, it does so from people and businesses whose savings would otherwise finance private investment, such as factories and computers.  Although an increase in government borrowing strengthens people’s incentive to save—in part by boosting interest rates—the resulting rise in private saving is not as large as the increase in government borrowing; therefore, national saving, or the amount of domestic resources available for private investment, declines,” concluded the Congressional Budget Office (CBO) in a long-term budget outlook paper from 2021.

The Congressional Budget Office estimates that net interest costs will make up about 40% of federal revenue by 2052, meaning that less federal spending will be able to focus on infrastructure and drivers of economic growth. CBO is currently projecting that the federal budget deficit will decrease in 2022 and 2023 but then will rise to 6.1% of GDP in 2032. Going one step further, CBO estimates that annual interest costs will grow from 1.6% of GDP this year to 3.3% of GDP in 2032, the highest ever recorded.

“The astute investor might be wondering if this is a sustainable path for the U.S., especially with high inflation, the Federal Reserve raising rates, and by any historical measure, massive debt levels that may reprice at potentially higher interest rates,” wrote Hackett and Ayers.

Because the U.S. dollar is the world’s primary reserve currency, it has allowed the U.S. to have debt at lower costs than other countries around the world. Some economists are raising alarm bells that the U.S. is headed into a possible debt trap where greater debt drags on growth, creating yet more debt, while other economists believe the U.S. is in a position to continue taking on debt.

“As the debate continues, most investors would agree that less debt servicing costs and protecting our unique reserve currency status in the global economy is a prudent strategy that can ensure economic growth for generations to come,” the authors said.