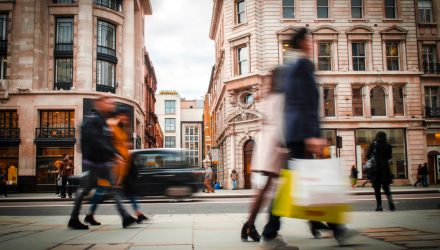 Retail ETFs Could Rebound as Cooped-Up Shoppers Step Out

If the Memorial Day weekend is any indication of American habits, consumers may be returning to shops. Data from cellphone location companies like Unacast revealed Americans are rushing out of their homes after being cooped up during the countrywide shutdown.

Unacast cellphone data estimated visits to some beach towns in southern states, including Alabama and Texas, roughly doubled from May 22-25 over the holiday weekend in 2019, Reuters reports.

Additionally, traffic to resorts in the northeastern United States jumped week-over-week but remained roughly half that of the Memorial Day weekend of 2019, Unacast estimated, as the region is still under tighter coronavirus restrictions from New York City to Washington, D.C.

Unacast data also revealed national traffic to retail sites over the past week returned to about 25% of 2019, with a broader set of industries enjoying greater activity.

For example, Abercrombie has seen sales volumes for its mall-based shops trend at 55% normal levels after the reopening, compared to analyst expectations of around 25% to 30%, CNBC reports.

“The stores that are opened now are doing better than they anticipated, better than I anticipated,” Jan Kniffen, CEO at the consulting group J Rogers Kniffen WWE, told CNBC. “It really looks like a V-shaped recovery if you are looking at the retailers.”

While sales might not be anywhere near-normal levels, the uptick in consumer activity is promising for the retail segment.

However, observers still show concern about the American consumer as another 2.1 million people filed for unemployment benefits for the week ended May 23, but it was a slight improvement with a 323,000 drop from the prior week.