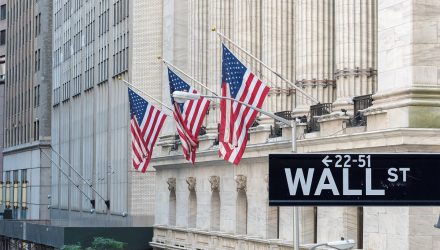 ACWX tracks the MSCI ACWI ex USA Index, which excludes U.S. equities. Some market observers believe expected returns on U.S. stocks are lower from a  historical perspective due to high valuations. While U.S. stocks are more richly valued than many of their international counterparts, but there are valid reasons why that is the case.

“As has been the case in previous years, the out-performance of U.S. stocks over most other markets is being driven by a mix of better earnings growth and relentless multiple expansion,” said BlackRock in a recent note. “Since 2010, the S&P 500 Index has outperformed (on a price basis) the MSCI ACWI ex-U.S. Index by an average of 70 basis points (bps) a month, a statistically significant difference.”

Not Always The Case

Historical data suggest that the gap between U.S. and international equities has not always been as wide as it is today.

“While investors have become accustomed to this state of affairs, it was not always the case,” according to BlackRock. “In the period between 1990 and the end of 2009, the return differential between U.S. and non-U.S. equities was much smaller. During that period the average monthly performance spread was 22 bps, the median, which is less influenced by extreme observation, an even more insignificant 8 bps.”

One of the primary reasons U.S. stocks are outpacing foreign rivals is return on equity (ROE). ROE “is considered a measure of how effectively management is using a company’s assets to create profits,” according to Investopedia.