You are at:Home»Relative Value Channel»Pompeo: Trump Prepared to Walk Away From a Bad Deal 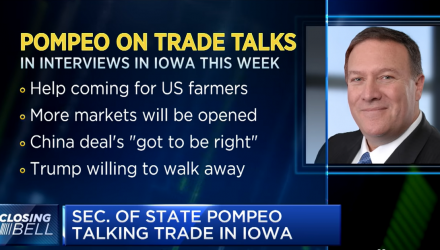 Pompeo: Trump Prepared to Walk Away From a Bad Deal

CNBC reported that the U.S. and China could be in the final stages of negotiations after the trade truce between the two economic superpowers expired on March 1.

In the video below, CNBC’s Kayla Tausche reports on Secretary of State Mike Pompeo’s U.S.-China trade talk comments during his trip to Iowa.