You are at:Home»Relative Value Channel»Grantham: I Would Stay Away From the US 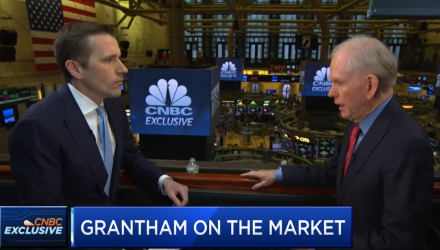 Grantham: I Would Stay Away From the US

The Commerce Department reported that gross domestic product rose 2.6 percent during the fourth quarter, which bested expectations of 2.2 percent by a Dow Jones survey of economists.

“The deceleration in real GDP growth in the fourth quarter reflected decelerations in private inventory investment, PCE, and federal government spending and a downturn in state and local government spending,” the Bureau of Economic Analysis wrote in a statement. “These movements were partly offset by an upturn in exports and an acceleration in nonresidential fixed investment. Imports increased less in the fourth quarter than in the third quarter.”

In the video below, CNBC’s Wilfred Frost sits down with Jeremy Grantham, legendary investor and co-founder of GMO, to talk about the markets and global economy.