Get Ready for a Weaker U.S. Dollar … and Stronger Gold

Unemployment in the U.S. is at a half-century low and the S&P 500 is trading at near-record highs. Nevertheless, the Federal Reserve today trimmed interest rates for the first time since the financial crisis on stalled manufacturing growth and an anticipated world economic slowdown.

The easing cycle may be the catalyst gold needs to outperform the market and retrace its monster bull rally in the 2000s, according to Bloomberg Intelligence strategist Mike McGlone.

“Gold prices appear on a similar launchpad as 2001 when the Fed began an easing cycle,” McGlone writes in a note dated July 29. “The greatest bull market of this millennium so far began about the time of that first-rate cut, following an extended gold-price downdraft and rally in the dollar.” 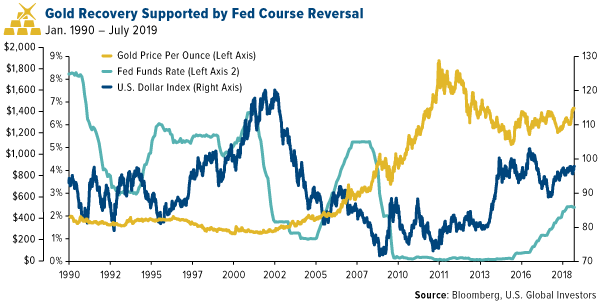 With the Fed having locked in a rate cut, the question now is: What happens in the months to come? Is this simply a one-off, or is it indeed the start of a new easing cycle?

Markets appear to have priced in three cuts by year-end. As a result, I would expect to see the dollar trade lower, which in turn should allow the price of gold—the classic anti-dollar—to soar.

As I shared with you earlier in the month, a weaker greenback is one of three “key ingredients” for a gold bull market, according to research firm Alpine Macro, the other two being a more accommodative Fed (check) and rising geopolitical risk (check again).

The Fed is just the latest central bank to lower rates. No bank, in fact, is pursuing higher rates right now, the first time in six years we’ve seen this.