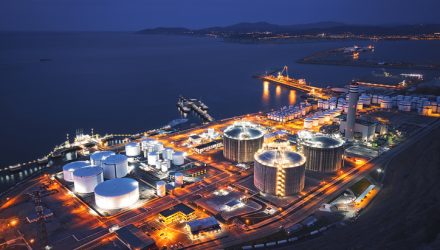 Energy sector exchange traded funds led the charge on Thursday after crude oil prices spiked in response to supply fears, following an attack on two oil tankers in the Gulf of Oman, close to the Strait of Hormuz, a significant outlet where the world’s oil is shipped through.

After retreating to a five-month low on Wednesday, oil futures rebounded sharply on news of a suspected attack on two tankers in the Gulf of Oman near Iran and the Strait of Hormuz, which a fifth of global oil supply passes through.

The incident also came as tensions between the U.S. and Iran escalated in recent months, with Washington putting the pressure on Tehran in early May with more sanctions, aiming to reduce oil exports to zero, the Wall Street Journal reports.

“The oil market was believing that geopolitical tensions between Middle Eastern countries had subsided, but they’ve re-emerged here, increasing risk premium and fears of a supply shock,” Geordie Wilkes, head of research at Sucden Financial Research, told the WSJ.

Thursday’s rally in the energy market was a stark contrast to the heavy selling on Wednesday after the U.S. Energy Information Administration reduced its oil demand growth forecasts and bearish inventory data.

Moreover, the Organization of the Petroleum Exporting Countries cut its 2019 forecast for world oil demand growth and highlighted a 25 million barrel April increase of oil inventories in Organization for Economic Cooperation and Development countries. Looking ahead, “the most recent escalation in trade disputes, among numerous other challenges to world economic development, may lead to lower growth in the near term,” OPEC said, referring to the trade between the U.S. and several of its most significant trading partners, notably China.