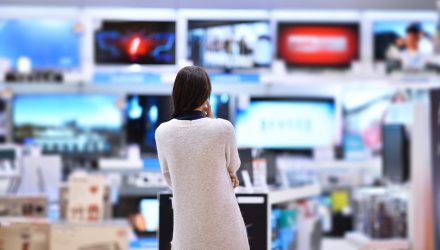 Where to Shop With Consumer ETFs

Consumer staples stocks and the related exchange traded funds have had some struggles this year, but the group has recently shown some signs of life. For example, the iShares Dow Jones U. S. Consumer Goods Sector Index Fund (NYSEArca: IYK) is up more than 1% over the past month.

“Consumer discretionary ranks among top-performing sectors globally this year while consumer staples falls near the bottom despite a summer rally. We attribute staples’ recent out-performance to investors closing their underweight positions,” said BlackRock in a recent note. “Earnings revisions appear to have bottomed, which could provide support into year-end. Yet staples are not necessarily ‘on sale.’ U.S. valuations are only slightly below their five-year average and at a modest premium to the broader market.”

Food, beverage and tobacco stocks account for 46.56% of IYK’s weight. Tobacco stocks slumped earlier this year, but have recently rallied amid news the Food & Drug Administration (FDA) is looking to enact stricter regulations against makers of competing e-cigarettes. The ETF also devotes about 35% of its combined weight household products makers and consumer durables manufacturers.