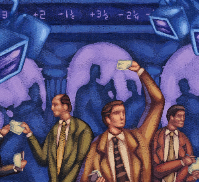 In this post, I am going to look at why the stock market lost over 50% of its value during this time and look at what has happened since. How has government responded to protect investors? How have investors fared in the 10 years since?

Let’s get started looking into these questions.

Why The Stock Market Dropped During The Great Recession

The reason the stock market dropped began out of uncertainty. At the time, banks were underwriting mortgages and then packaging these mortgages into pools and selling them to investors. On the surface, this looked like a nice fixed income investment.

But the problem was that the banks were mixing mortgages from various credited buyers. In many cases, you had mortgages that were going to easily be repaid by the homeowner because they could afford their house.

Mixed in with these mortgages were loans of homeowners who could not afford their monthly payments and were highly likely to default on their loan. Because investors had no idea what mortgages made up the security pools they were buying, fear set in.

When you add in job layoffs, loss of income, and a slowing economy with fear, it is not a surprise that the market dropped as though it did.

What We’ve Done To Protect Investors

Since the Great Recession, there have been numerous laws enacted to protect investors. Some laws have gone into effect to ensure that money market funds cannot break the buck. For investors the biggest impact has been the Dodd-Frank Act.

The result of these regulations have helped or hurt investors depending on who you talk to. But for the most part, they have been beneficial to investors in ensuring a safer trading environment.

How Investors Have Fared

When it comes to investors and the Great Recession, there are two distinct camps. On the one hand, you have investors who did not jump off the ledge and remained invested. For these investors, they earned back their losses by late 2011 or early 2012.

The other group of investors, those who fled the market, lost a lot of their wealth. Many were so scarred by the incident that many are still not investing to this day. This is a shame because we have experienced the greatest bull run in the history of the stock market since 2009.