The Dow's Dilemma
You are at:Home»Portfolio Construction Channel»The Dow’s Dilemma 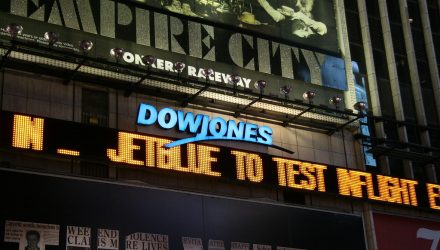 In June, the Dow Jones Industrial Average ejected General Electric Co. in what a recent Wall Street Journal article describes as an “effort to adapt a 19th-century index to a 21st-century economy.”

But the path to modernization of the index, the article says, is complicated, largely because of its price-weighted methodology. This differs from indexes such as the S&P 500, which is weighted by its components’ market capitalizations.

“Critics also contend,” the article reports, “the index’s selection committee has been removing troubled companies to avoid undermining the average’s long-term performance.” The recent addition of Walgreens to the index has, the article says, confounded some investors since the large retailer is part of the consumer staple sector that has been struggling against the headwind of Amazon’s “e-commerce prowess.” But the inclusion of Amazon (with a current stock price of around $1,750 per share) would cause “massive day-to-day gyrations in the Dow,” the article explains. [Note: Component stocks of the Dow are selected by the index committee, a group that includes editors of The Wall Street Journal, which is published by Dow Jones & Co., a part of NewsCorp.]

According to the article, analysts are predicting that GE shares will rise over the short term, and says that some investors and analysts think the current trend of removing underperforming stocks suggests that the index committee has often “mistimed its decisions, removing a company before it has fully had a chance to make a turnaround.” According to Ned Davis Research going back to 1972, stocks that have  been removed from the Dow Industrials have tended to outperform it over time, with companies outpacing the blue-chip index by an average of 9.2% over the following 12 months.