You are at:Home»Portfolio Construction Channel»Tech ETF ‘VGT’ Could Keep Soaring if Microsoft, Apple Deliver on Earnings 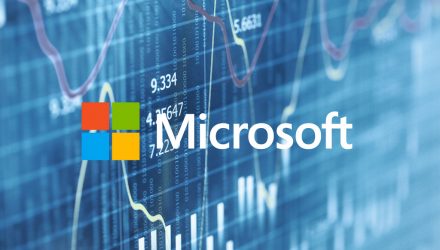 The Vanguard Information Technology ETF (NYSEArca: VGT) has been a prime beneficiary of the index it tracks, the MSCI US Investable Market Index/Information Technology 25/50, and it can continue to soar, particularly if its two largest holdings, Microsoft and Apple, can deliver on earnings.

Based on Yahoo! Finance performance numbers, VGT has been performing admirably–up 10.64% year-to-date, 30.12% the past year (beating similar benchmarks in its category by almost 20%) and 21.25% the past three years. Looking at the YTD chart, it has never dropped below its 200-day moving average.

Apple Inc comprises the majority of VGT’s holdings at 15.31% and Microsoft comes in second at 11.75%. Both companies are expected to report earnings, starting with Microsoft this Thursday and Apple on July 31 after the U.S. markets close.

For Microsoft’s fourth-quarter fiscal 2018 results, early projections show a rise in quarterly sales to $29.17 billion, based on consensus estimates from Zacks–an 18.1% increase from the previous year. Historically, Microsoft has a positive record of earnings, particularly in the last four quarters, beating consensus estimates by an average of 19.5%.

Last quarter, Microsoft posted earnings of $0.95 per share, beating the Zacks Consensus Estimate by $0.10. In addition, revenues of $26.82 billion increased by almost 15.5% from the previous year. Microsoft’s stock has been up 43.8% the past year and 23.4% year-to-date.