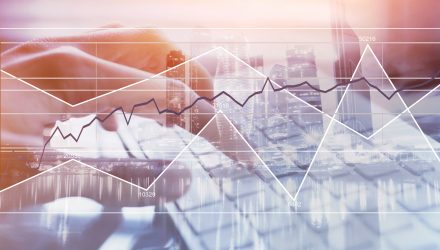 A Smart ETF Strategy to Find Value in U.S. Stocks

ETF investors who still believe in the U.S. equity story should look to value plays through a revenue-weighted indexing strategy as a way to enhance a portfolio and capture U.S. market opportunities.

As investors continue to favor U.S. equities, Leger argued that large-caps may continue to outperform small-caps for at least another year. Some believe that valuations in large-caps look pricey, but larger companies have traditionally traded at larger price-to-sales ratios than their small-cap peers due to the higher risk and lower liquidity in smaller companies. The last time small-caps outperformed was when their discount rose to 62% against large-caps, and we are still not there yet.

The Trump administration has been great for large-caps. Larger companies typically benefit more from lower corporate tax rates than small-caps. While the reduction in the tax rate for small companies is generally larger than it is for big companies, the current tax law continues to give large corporations a distinct advantage over their smaller competitors.

Large-caps typically do better during the initial stages of Federal Reserve monetary tightening. When the U.S. Treasury yield curve flattens as the Fed hikes short-term rates, larger company stocks have enjoyed an average 1.6% excess return to small-caps, going as far back as the 1980s.

“A flattening curve now points to more challenging economic conditions down the road, and bad news for economy-sensitive segments of the stock market. When the Fed starts normalizing monetary policy, raising interest rates, flattening the curve and discouraging risk taking, which is exactly what it’s doing, the mature, established companies in the U.S. equity universe tend to benefit,” Leger said.

U.S. large-caps have also shown average excess returns of 3.5% over small-caps during periods of falling U.S. manufacturing activity based on the ISM Manufacturing PMI since the 1980s. Leger argued that stable companies are relatively insulated from a softer macro backdrop compared to their volatile brethren, which would occur during peaking economic growth or the later stages of the business cycle.

Despite the potential head winds or short-term risks, like tariffs and the trade wars, large-caps may continue to experience faster growth, compared to their small-cap peers. The S&P 500’s expected 12-month forward earnings per share increased by 20.4% year-over-year, compared to the Russell 2000’s equivalent rising by 20.0% year-over-year.

Investors also continue to vote with their money, and many are funneling billions into large-caps over small-caps. U.S. equity large-cap funds have attracted $405 billion through early 2018, whereas U.S. equity small-cap and mid-cap funds saw $19 billion in inflows and -$5 billion in outflows, respectively.