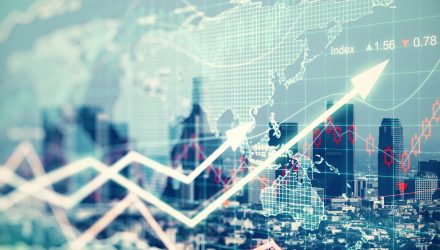 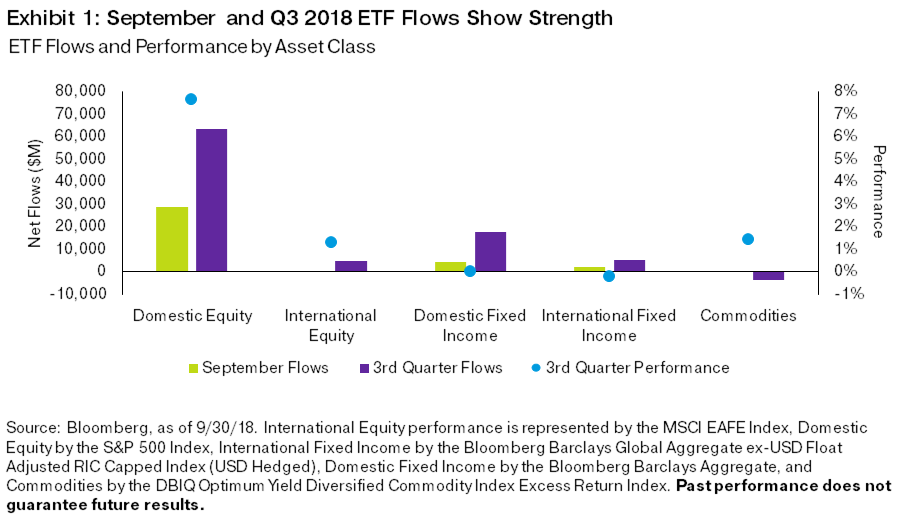 The third quarter certainly reminded us of that tailwind–growth outperformed value by nearly 4%, widening the performance spread to over 13% in favor of growth. Third quarter ETF style flows have deviated from this performance backdrop, as flows skewed toward value funds by nearly $5 billion relative to growth, perhaps an investor cry for less rich equities amid a 10-year bull market. Participants were burned by this “reversal anticipation” in late 2017 when they similarly placed more than $5 billion in value over growth only to see growth outperform value by more than 5% during the first three months of 2018. 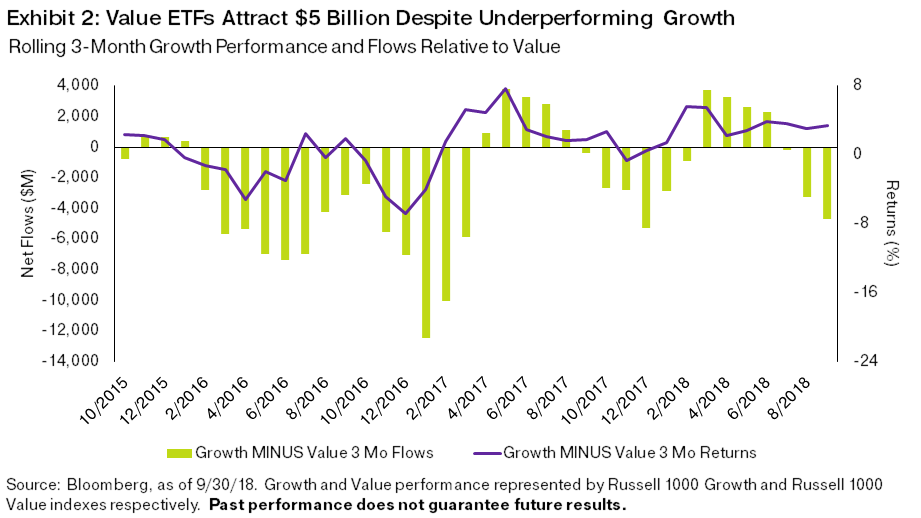 After a brief period of outperforming large caps with dollar strength, small caps underperformed larger companies by nearly 4% during the third quarter, losing $25 billion in net flows in the process. This is to be expected, as standard asset allocation calls for greater weight to large caps than small caps given their historically more stable returns. However, when the VIX spiked earlier this year, investors found shelter in small caps, as both flows and relative performance depict in Exhibit 3. In fact, net flows into small caps outpaced large-cap ETF flows, quite the rarity in the ETF marketplace. This trend continued into the middle of the year, as the NFIB Small Business Optimism Index hit its highest level in 45 years during August, a display of small business confidence amid swift fiscal expansion. However, performance speaks louder than optimism, and as the small cap “sugar rush” has tempered more recently, funds flowed back into large caps during the third quarter. 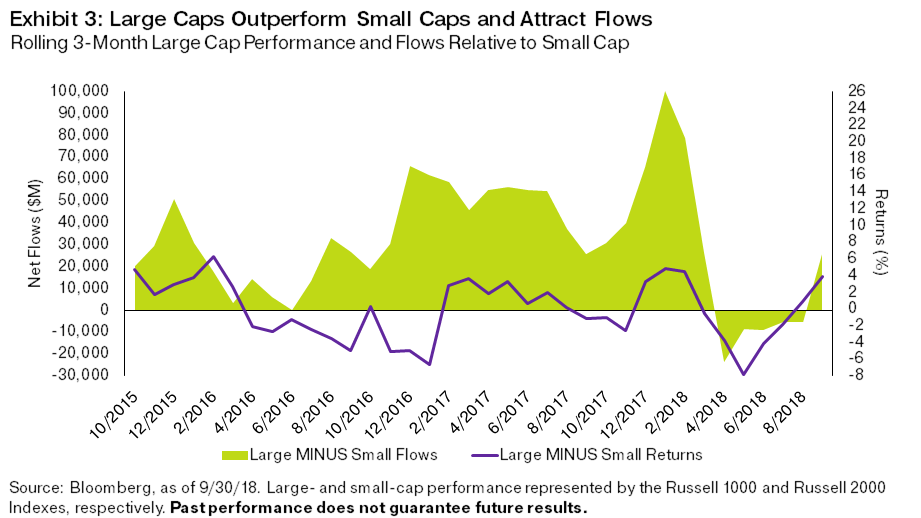 When the growth trade was losing steam toward the end of the first half of the year, technology shares were a topic of conversation. The market’s leaders have seen both balance sheet and shareholders’ equity gains over the past few years, but new data privacy regulations combined with already lofty valuations have investors speculating on future returns. Combine this with a macro backdrop that still favors growth equities, and investors have rotated to other industries to fulfill that growth goal. Healthcare is one of those sectors–investors placed a record $6.7 billion into healthcare ETFs over the past three months. This is perhaps not surprising given the sector was up nearly 15% for the quarter. The second-best performing sector, Industrials, also posted double-digit gains, yet participants were more reluctant to place industry bets in this area, perhaps because of the threat of continued tariff rhetoric and potential logistical disruptions to these companies. 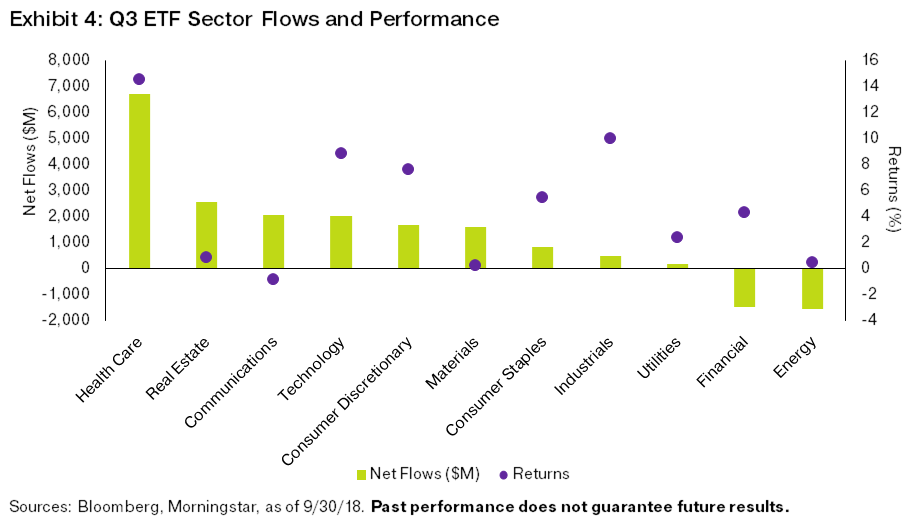 High yield (HY) spreads have continued to narrow amid relative outperformance versus investment grade, while USD strength has punished certain emerging market (EM) economies with extreme levels of USD-denominated debt. Thus, while HY credit spreads have tightened, EM credit spreads have gone the other way, and the spread between the two has contracted to some of the narrowest levels we’ve seen. However, in a sign of contrarianism, investors placed $700 million into EM fixed income last month and more than $2 billion into EM fixed income for the quarter, their collective eye on a potential value opportunity. 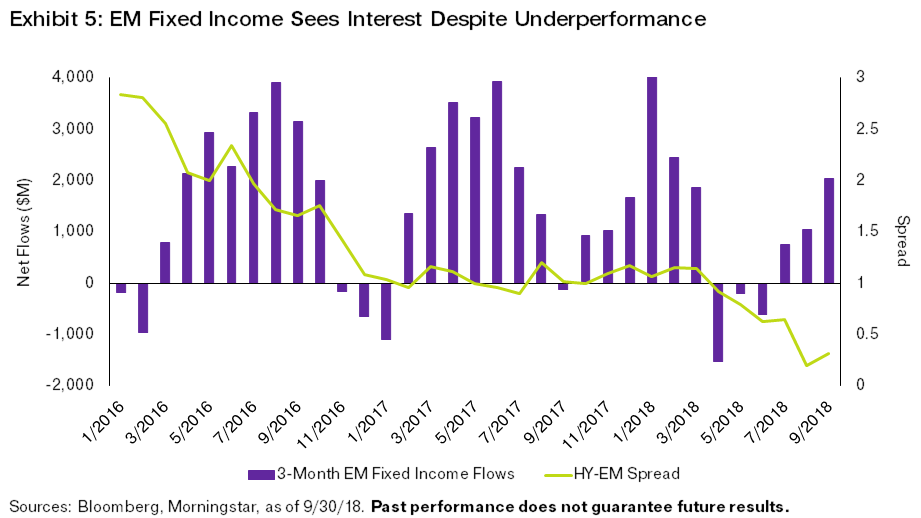 An Eye on the Fourth Quarter and Tax-Fueled Trading

With three months to go, ETF flows are still nearly $100 billion off last year’s pace. It’s safe to say that flows are not going to hit the record levels that the industry enjoyed last year. Still, the third quarter certainly showed that ETF investors are capable of investing with the velocity that we witnessed last year, even if it hasn’t been consistent year-round. The fourth quarter tends to see some of the chunkiest ETF flows as planners utilize the ETF vehicle for tactical movements to shelter portfolios from unwanted capital gains. In fact, over the past five years, fourth quarter ETF net new flows on average made up 39% of total flows for the year. In 2014, the fourth quarter accounted for more than 50% of net flows during the entire year. Let’s watch and see what this quarter has in store for the ETF marketplace.

This article was republished in full with permission from OppenheimerFunds.