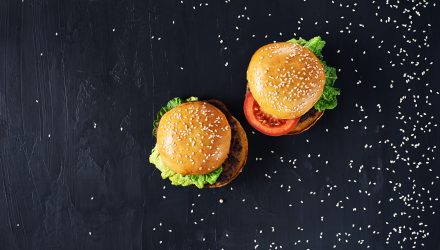 The Problem of Inflation

In short, inflation is when the prices of goods and services rises over time, which means the “purchasing power” of your money is falling. A Big Mac may be priced at about $4.00 today. But if the cost of the Big Mac ingredients (beef, flour, lettuce, etc.) and the labor (hourly wages) to make the Big Mac go up by 3% a year (for example), the price of a Big Mac may be $4.15 next year. It’s the exact same Big Mac, but next year you might need an extra $0.15 to buy it. Your $4.00 can’t buy quite as much as it used to; it’s “purchasing power” has gone down.

An extra $0.15 for a $4 purchase doesn’t sound particularly alarming, even if you apply it to every purchase you make next year. But the problem becomes more apparent if you start to consider the compounding of annual price increases over many years. I’ve already established that successful investing is a long-term endeavor, involving a few years for bond investing and at least 5 to 10 years for stock investing.

Over these time spans, the dreamy miracle of compounding returns turns into a nightmare when it comes time to spend those returns on something in the real world. As shown in this graph, all the while your investments are compounding, so are the prices of goods and services thanks to inflation. And the longer compounding works, the greater the increases in both returns and prices. 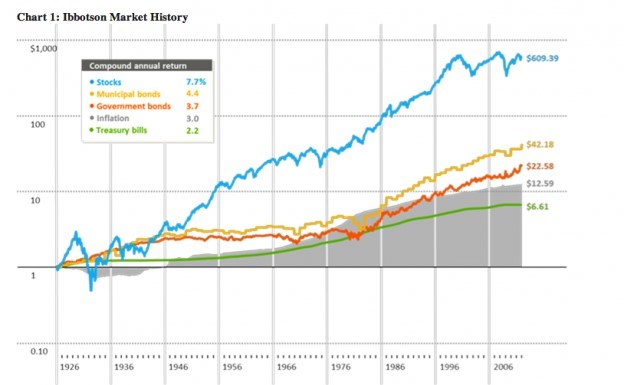 In this example, if you had invested $1 in government bonds in 1926, you’d have about $23 now (red line). But during that same 90 years, something that was priced at $1 in 1926 is now priced at about $13 today (gray shading). In other words, you could buy almost three pounds of cheese for one dollar in 1926, while today you need around $5 to buy just one pound of the same cheese.

Well, not the exact same cheese, because that would be incredibly hard and moldy by now. That 23 times increase in your bond value is a mere 1.8 times increase when the declining value of a dollar is factored into the analysis. Taking more than 90 years to only double your money seems like a pretty dismal investment plan. How can we do better?

I’ve already talked about how inflation impacts specific investments. For example, in Article 6.2 I noted that most estimates point to a future 4 to 6% annual average return for stocks on a non-inflation adjusted basis, and more like 2 to 4% when inflation is considered. A couple of percent difference between nominal and real return may not sound like a lot, but it has a huge effect over time. Here’s a graph I created using Robert Shiller’s data comparing compound returns in the S&P 500 on nominal and inflation adjusted real basis (orange and gray lines). The yellow bars show how inflation varied over time and contributed to the divergence of nominal and real returns. 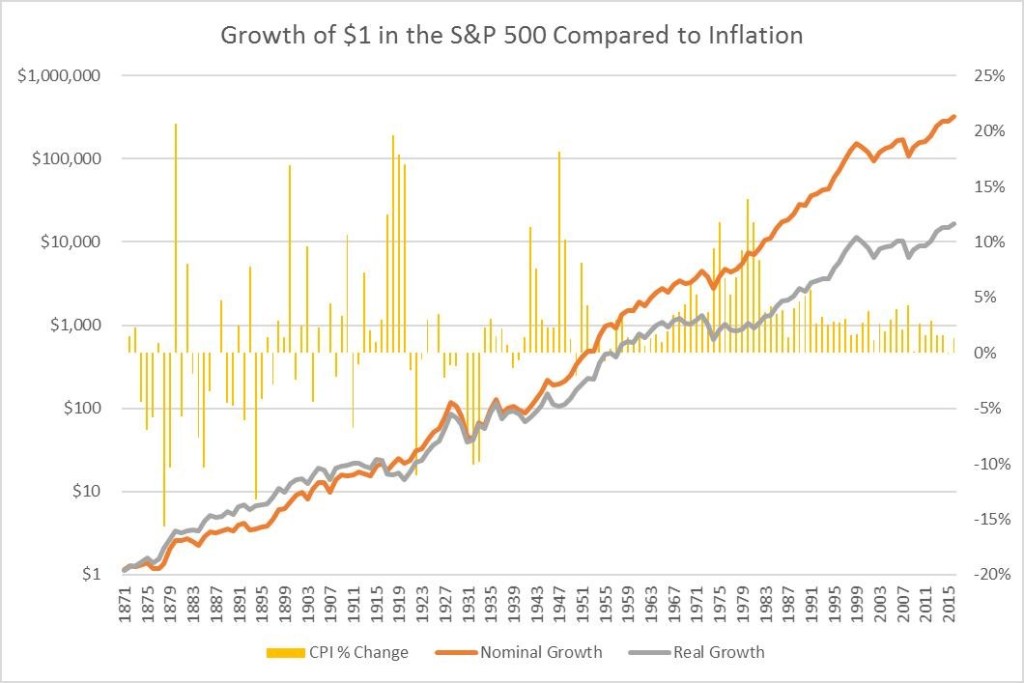 The idea of turning 1$ into almost $320,000 sounds a lot more compelling than the bond growth scenario discussed above. But again, the real result is closer to only $17,000 when the purchasing power of those dollars is considered. That’s $303,000 dollars in potential return vaporized because of inflation.

This graph also illustrates that when inflation is sporadic or negative (called deflation), like it often was from 1871 to about 1931, the nominal and real stock returns aren’t that different. When inflation is consistently positive, like 1940 to today, the nominal and real return lines diverge rapidly. In real terms, stock performance over time can be mostly explained by inflation rates alone, even if you regard yourself as a particularly good stock picker.

Media articles often assert that inflation makes bonds a “bad” investment or cash a “terrible” investment. One of the most important points that is often left unmentioned is that inflation impacts all investments essentially equally. It doesn’t matter whether a $10 investment return came from stocks, bonds, or even cash.

The value of that $10 is still the same, and that value is always less than it was 5, 10, or 20 years ago, regardless of how you obtained it. The real question of importance is not how the money was invested, but how long it took to generate that $10 return. That’s because inflation was constantly eroding the value of each dollar over time regardless of the investment vehicle.

If you like to think in mathematical terms, the “Fisher” equation for calculating real (inflation adjusted) returns makes it completely clear that all investments are effected equally by inflation.

In this case, RN is the nominal (non-inflation adjusted return) and RI is the inflation rate. The exact same equation is used for stock, bond, and cash returns. You can plug-in the inflation rate and annual nominal return for any investment and get RR, the real (inflation adjusted) return. So, if your stocks returned 8% last year, and the inflation rate in that year was 3%, your real rate of return was 4.854%. You’ll note that 4.854% is approximately equivalent to just taking 8% (the nominal return) minus 3% (inflation rate), which equals 5% (the approximate real return). People often use this simple subtraction method to obtain a quick estimate of the real return.

This table provides both the exact and quick estimates of real returns using a 2% annual inflation rate and expected future nominal returns for stocks, bonds, and cash.

The major caveat, as we’ve seen in prior articles in this series, is that inflation is only one of many mechanisms that can decrease your investment returns. A stock market crash is another mechanism I’ve copiously discussed. So, saying “cash” is a terrible investment because of inflation, completely ignores the other risks involved in holding stocks and bonds. , Having a cash reserve in your overall investment portfolio that is spent over a several year time frame is a “good” investment strategy under the correct circumstances.

Another thing you will often hear from the media and professional advisers is talk about inflation “risk”. I discussed in Article 4.3 that the term “risk” is loosely used in different ways and with different meanings. Risk is often misunderstood as a concept, and therefore, the term is overused and even abused.

The assessment of risk, and the subsequent concept of risk management, was born out of the nuclear power and space exploration industries. In this context, a risk is not anything bad that you can imagine, but rather, it is an uncertain or infrequent event that could cause substantial harm.

For example, a space rocket designer might want to consider the risk of a one-time failure in a specific reusable rocket booster seal, which was the cause of the Challenger space shuttle disaster in 1986. In the investing world, a similar type of risk might be subprime mortgage lending practices leading to a stock market crash in 2008.

In contrast to a classic risk factor like a rocket seal failure, inflation is a predictable and more or less continual process that impacts all investments equally. The last graph shown above makes it clear that, particularly since the 1940s and the development of modern monetary policies, inflation has occurred continually with some variation in magnitude. In this sense, inflation is not a classic risk factor, and is poorly addressed through risk management. Inflation is more like the expected corrosion in a rocket booster nozzle over time.

In cases like these, engineers know the nozzle materials they use will corrode and degrade after repeated usage, and they know that no material is entirely immune to this process. So, instead of treating these continual processes as uncertain risks, engineers build in operations and maintenance procedures to track, minimize, replace, and correct material degradation problems before a disaster occurs. For an investor, inflation is much more of an operations and maintenance problem than an uncertain “risk”.

There is no “risk” of inflation, because the continued existence of inflation (or deflation) is a near certainty. The only time it probably makes sense to talk about inflation “risks” is when considering the possibility of sudden and large changes in the inflation rate. One example of an inflation risk might include a rapid swing from inflation to deflation as occurred multiple times in prior to the 1920s.

Another example might be a sudden large increase in inflation from moderate to extreme levels as occurred in the 1970s. These unexpected and infrequent swings in inflation should be considered when in investing, because they may seriously impact your portfolio.

To guard against true inflation risks (rapid and unexpected swings in inflation rates), we need to look at the history of inflation versus stock, bond, and cash returns. History is never going to predict the future exactly, but it’s often some of the best empirical data available.

Bonds – This graph compares the 10-year bond yield (blue line) and Federal Fund Rate (FFR; redline) to inflation rates since 1960. The FFR is a reasonable proxy for cash interest rates, such as a 6-month certificate of deposit.