You are at:Home»Equity ETFs»As NFL Season Begins, U.S. ETFs Continue to be the ‘Quick Slant’ Play Call for Investors 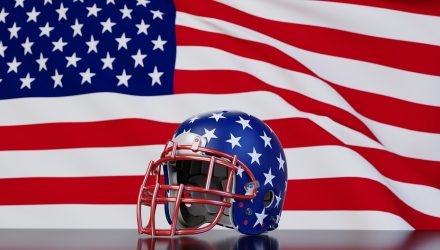 As NFL Season Begins, U.S. ETFs Continue to be the ‘Quick Slant’ Play Call for Investors

The inaugural game of the 2018 NFL season begins tonight with the Atlanta Falcons facing the Philadelphia Eagles. Every team has a go-to play like the quick slant to obtain that swift, short yardage gain to establish or maintain forward momentum and in the playing field of exchange-traded funds, U.S. ETFs have mimicked that call.

According to a report from State Street Global Investors, 80% of all equity inflows were into domestic-oriented funds and $19.7 billion were deposited into U.S.-listed equity ETFs in August alone. The numbers reflect that in this extended bull market run, investors still favor U.S. ETFs as their go-to call in the game of profit-seeking.

“On a regional basis, the US continues to be the “quick slant” play call, outperforming developed and emerging markets by 5.5% and 6.2% in August, respectively,” said Matthew Bartolini, Head of SPDR Americas Research State Street Global Advisor. “These sizeable gains have pushed both regions’ outperformance into the double digits on the year.”

In the meantime, trade wars have been akin to a cornerback putting the defensive lockdown on the forward momentum of emerging markets ETFs. In addition, rising interest rates and a stronger dollar have also batted away any attempts at gains–this month, emerging markets will be watching the Federal Reserve closely with respect to monetary policy or even more specifically, what the central bank decides to do with interest rates.

The U.S. dollar has been gaining strength, but its ramifications have been felt globally, particularly with respect to emerging-market assets. A rising dollar could mean financial instability for emerging market nations trying to pay outstanding U.S. debt obligations with local currencies. Rising interest rates may also discourage foreign investment into emerging market nations in favor of assets based in the U.S.

EEM, VWO and IEMG are all down from a year-to-date performance standpoint based on Yahoo! Finance performance numbers. EEM has lost 4.17%, VWO is down 3.63% and IEMG is in the red 4.13%, but savvy investors could see the opportunity in the dip given the cheaper valuations as well as their current market cycles relative to the U.S. capital markets’ late cycle.