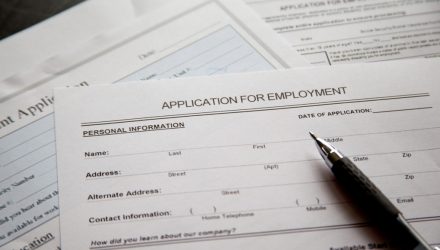 Markets Down Despite Better-than-Expected Employment Data

All the major indexes were in the red despite October’s better-than-expected employment data from the Labor Department, which showed that year-over-year wage gains surpassed 3%–a first since the Great Recession, while nonfarm payrolls gained 250,000–better than the expected 190,000 by Refinitiv estimates.

The latest employment data paired recent numbers showing wages and salaries climbed in the third quarter to its highest level in 10 years, beating out polled economists’ expectations with a 0.9% increase as opposed to the 0.5% forecasted. The Labor Department also reported that the employment cost index was 0.8% higher, narrowly beating estimates of 0.7% from a Refinitiv survey of economists.

The unemployment rate remained at a generationally low 3.7%. Average hourly earnings gained by 5 cents an hour during October and 83 cents year over year–the largest jump since 2009, which will be a key metric should the Federal Reserve hike interests for a fourth and final time in 2018.

“Today’s stronger than expected October employment report was a mixed bag for stocks,” said Alec Young, managing director of global markets research at FTSE Russell. “On the positive side, strong job growth will allay fears of slowing economic growth. However, with wages up 3.1 percent year over year … it will be more difficult for the Fed to slow its rate hiking campaign.”

Despite the better-than-expected employment data, the major indexes were all down–the Dow Jones Industrial Average was down about 30 points, the Nasdaq Composite fell over 50 points and the S&P 500 edged seven points lower.