You are at:Home»Portfolio Construction Channel»March 2018 ETF Flows Close Out Q1 with a Pinch 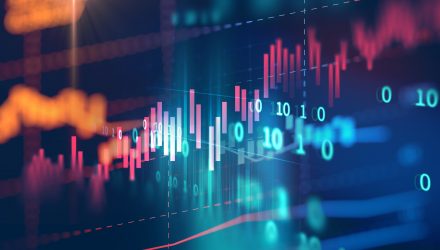 That was significantly different from last year’s circumstances, when investors added $45 billion to ETFs in March 2017, and total inflows into ETFs for the first quarter of 2017 were $133 billion, more than double what we saw this year.

This year’s positive flows for the first quarter overall were largely attributable to massive ETF inflows in January. The outflows for February and March of this year were evidence of recent market action weighing on investors. The last time ETFs saw two months of consecutive outflows was nearly a decade ago. The choppiness of flows was fueled by index rebalancing and sustained volatility heading into month end, driven by weakness in technology and concerns regarding trade tariffs, both of which weighed on the broader market.

With the Federal Open Market Committee (FOMC) raising the Federal Funds rate, a casual observer may expect this headwind to create significant outflows from fixed income ETFs. But with volatility among more risky assets increasing, investors continued to seek fixed income to buffer portfolios. With both developed ex-U.S. and emerging markets index performance outpacing their U.S. counterparts in March, international equity showed resilient flows as investors added close to $3.6 billion to the category. Led by inflows into gold-backed ETFs, commodity ETFs also saw modest inflows even as investors sold out of energy-focused products.

In equities, U.S. exposures bounced back, but remained in the red driven by close to $25 billion in net outflows from S&P 500 ETFs. These specific outflows continue to be led by institutional investors trimming long exposure to the market. For context, domestic equity ETFs aside from these S&P 500 ETFs, reported more than $13 billion in net inflows during March. In the face of a risk-off mindset, U.S. small caps outperformed on the month and ETF investors followed suit – small-cap flows have started to outpace large cap. Perhaps the gap in information technology weights is playing a role as the S&P 500 Index has a 10% greater weight to the sector than does the Russell 2000 Index. Interestingly, even in the face of relative underperformance of technology sector ETFs, investors continue to add to these funds, to the tune of $1.6 billion. The last month that IT-focused ETFs were in net outflows was June 2017.