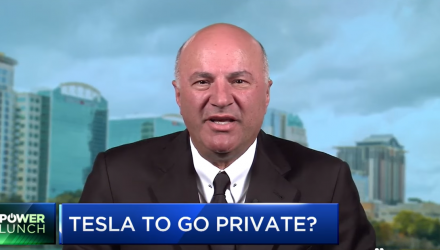 “If I were shorting this stock, I’d be sweating bullets,” said O’Leary.

“If Apple wanted to be in the car business, this is how you do it–you step up, doesn’t have to be $420 (per share), it could be another price. I think Elon Musk has made a really good chess move here.”

With the proposed price of $420 per share, it would effectively bring Tesla’s market value to a total of $71 billion. In an email, Musk told Tesla employees that he believes going private would be the “best path forward.”

“I fundamentally believe that we are at our best when everyone is focused on executing, when we can remain focused on our long-term mission, and when there are not perverse incentives for people to try to harm what we’re all trying to achieve,” Musk wrote.

Musk’s tweet halted trading of the company’s shares on Tuesday afternoon for 92 minutes, leaving Tesla investors in a frenzy. The shares did resume trading prior to the close of the market, and the share price closed Wednesday’s trading session at $370.34–down 2.43%.