You are at:Home»Portfolio Construction Channel»Hulbert: Bitcoin Will Never Replace Gold 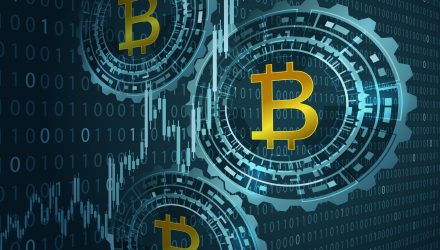 In an article for Barron’s, Mark Hulbert outlines the findings published in a paper by University of Chicago economics professor Eric Budish titled, “The Economic Limits of Bitcoin and the Blockchain.”

According to Hulbert, Budish’s paper argues that bitcoin is “destined to play no more than a ‘bit’ role in the global monetary system because, if it were to grow ever more significant, it would become increasingly vulnerable to an attack that could destroy much if not all of its value.”

Since a high of near $20,000 late last year, the article reports, cryptocurrency has suffered a nearly 70% drop in value (to below $6,000 in June). Though it has recovered some, it’s still far below its peak. Still, Hulbert writes, “bitcoin devotees continue to enthusiastically predict that it will someday replace gold to become the global store of nongovernmental monetary value.” But that would require huge growth in the cryptocurrency, that article points out, since the world’s gold is valued at $7.5 trillion (according to the World Gold Council), almost 50 times that of the world’s bitcoin.

Hulbert cites Budish’s explanation as to why larger amounts of bitcoin would increase its vulnerability: the “incentives that currently protect bitcoin from an attack assume that the costs of maintaining the network are greater than the value of attacking it. If the relationship is reversed—if an attack is worth more and maintenance costs fall—bitcoin would be vulnerable.” Specifically, Hulbert explains, bitcoin’s integrity depends on a large group of participants which, in turn, depend on huge amounts of computing power and electricity supporting that power. Budish estimates that it now costs $100,000 every 10 minutes to maintain the bitcoin network.

“Another way of putting it, “Hulbert concludes: “Bitcoin’s continued viability requires that its maintenance costs grow just as fast as the value of attacking it. That’s very expensive insurance.”