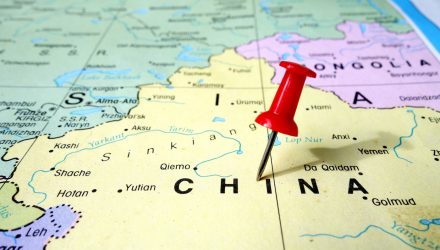 A Flurry of Hedging Activity Seen in a Big China ETF

Chinese stocks are struggling this year as the country has been in a trade spat with the U.S. If the current tariff-for-tariff tradeoff between the United States and China resembles a mere scuffle, multinational investment bank J.P. Morgan expects it to escalate into a full-blown trade war. Just recently, the firm lowered its ratings for Chinese stocks from neutral to overweight, citing that the trade wars will heighten to a point where its economy is substantially impacted.

“Short interest in the $3.1 billion iShares MSCI China exchange-traded fund, the largest tracking the benchmark, has jumped to more than 10 percent of shares outstanding, according to IHS Markit Ltd. data as of Monday. That compares to just 2.9 percent at the end of September, making it the biggest net increase in borrowed shares for such a period in almost six years,” reports Bloomberg.

The $3.13 billion MCHI holds nearly 300 stocks and tracks the MSCI China Index. Traders are betting China’s yuan is poised to extend its declines, potentially weighing on Chinese stocks in the process.

“While the gauge has already lost 28 percent since a January high, traders are pricing in a fresh leg lower in the yuan, as well as slowing economic growth and prospects that the Sino-U.S. spat will escalate. The benchmark, which has featured yuan-denominated stocks effective June, has also been hit by Tencent Holdings Ltd.’s steepest rout on record,” according to Bloomberg.