You are at:Home»Portfolio Construction Channel»Dow Climbs Over 300 Points as Trump, Xi Agree to Cease Fire on Tariff War 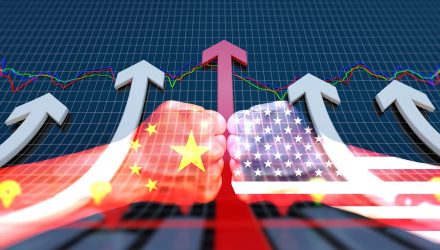 The capital markets got a reprieve from the ongoing trade wars between the United States and China as U.S. President Donald Trump and Chinese president Xi Jinping agreed to cease fire on their tariff-for-tariff battle, causing the Dow Jones Industrial Average to climb over 300 points on Monday.

The two leaders met at the G-20 Summit in Buenos Aires, putting global markets on pause as the two economic superpowers met to hopefully ameliorate their trade differences. As part of the agreement, both nations agreed to withhold imposing further tariffs on each other for 90 days while they work out a firm, ironclad deal.

“The explicit delay in tariffs is on the positive end of expectations,” said Helen Qiao, China and Asia economist with Bank of America Lynch. “In contrast to the fear–especially in Asia–that the hawks in US administration would make impossible demands, evidence of President Trump working towards a trade deal with China has emerged.”

The Asian markets responded positively to the news with the Shanghai Composite Index and Hang Seng Index surging on Monday.

“This truce should be seen as Washington recognizing the potential damage on the US economy if tariffs escalate further,” said Tai Hui, a strategist at JPMorgan Asset Management. “We see an ongoing dialogue between the two sides to be an important catalyst for Asian markets to recover lost ground this year.”