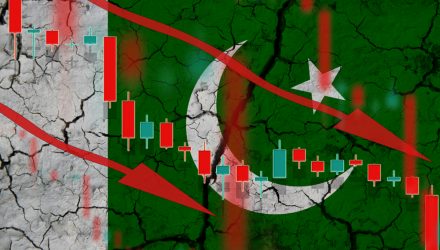 Pakistan’s country-specific ETF was among the worst performers Monday as the economy is expected to fall into a recession for the first time in close to seven decades due to the impact of the deadly coronavirus pandemic.

According to the World Bank, Pakistan’s economy may dip into a recession for the first time in 68 years, contracting up to 2.2% and experiencing a steep decline in per capita income, The Express Tribune reports.

Contradicting previous reports of an estimated 1% expansion for the current fiscal year 2019-2020, the World Bank on Sunday warned of a decline in Pakistan’s national output that could range from 2.2% to 1.3%.

The latest World Bank projections from the “South Asia Economic Focus” also outline sharp economic slowdowns across the region’s eight countries due to halting activity, plunge in trade and rising stress across financial and banking sectors. In Pakistan, 54% of manufacturing exports are related to textile and food, beverages, and tobacco sub-sectors.

“Pakistan, which has already experienced low growth rates in recent years, could well fall into a recession”, the World Bank said in the report, adding that with 1.8% population growth, it would imply a painful decline in per capita income as well.

“Pakistan suffered a decline in its GDP only once in her entire history (1951-52). Even at the height of the Bangladesh crisis in 1971, GDP growth was positive at 1.23%,” former chief economist Planning Commission Pervez Tahir said in a previous article that appeared in The Express Tribune in 2013.

“The priority for all South Asian governments is to contain the virus spread and protect their people, especially the poorest who face considerable worse health and economic outcomes,” senior World Bank official Hartwig Schafer said.

Poorer people will likely be the worst affected since they are more vulnerable to food price changes.