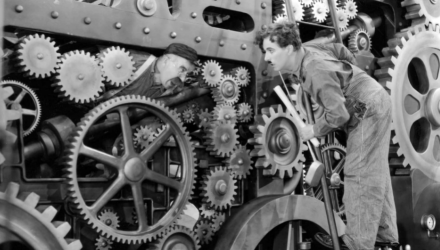 Not So Modern Times: The Backwards Thinking of Charlie Chaplin, Jeremy Corbyn

The fear of change is nothing new. Charlie Chaplin’s classic film Modern Times—one of the last silent films of the era—is perhaps the most famous critique of technology and its perceived impact on modern society. When the film was produced in 1936, Chaplin wasn’t alone in his fear of how a mechanized world would change lives and, indeed, the world as he knew it.

When Jeremy Corbyn, the U.K.’s current Labour leader, spoke at Wednesday’s Labour conference, his response to the “threat” of automation to today’s workforce was all too reminiscent of Chaplin’s theme of humans feeling lost and frightened in a world of increasing automation. Corbyn’s insinuation that “greedy” corporations are sacrificing the well being of society in exchange for money is inaccurate, and his recommendation to penalize companies who utilize “incredibly advanced technology” with added taxes is off base.

While it may be easy to criticize Corbyn for his comments (read The Telegraph’s article on his speech here), he’s certainly not the first to propose such a tax. Last February, Bill Gates, one of the world’s leaders in technology, went public with his support for a government tax on companies who utilize robots. Gates’ comments came on the heels of the overwhelming rejection of an EU proposal for a “robot tax” on technology owners designed to help retrain or otherwise support workers who are displaced by robots.