You are at:Home»Multi-Asset Channel»Time to Talk Turkey For Bold Investors 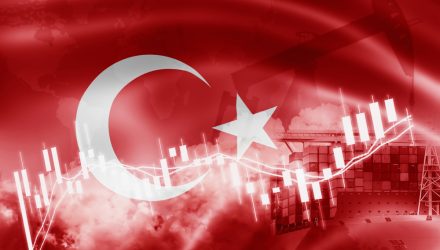 At a time when many investors are eschewing emerging markets equities and ETFs, the iShares MSCI Turkey ETF (NasdaqGM: TUR) may not be the first ETF investors are thinking about. However, some market observers see opportunity with TUR.

TUR, the lone US-listed Turkey ETF, is lower by 7% year-to-date. Turkey’s was particularly vulnerable to volatile moves associated with geopolitical risk in the Middle East as the country is a neighbor of both Iraq and Iran, and it has close political ties to Tehran, especially as the two countries alongside Russia try to find a solution to the ongoing civil war in Syria. Consequently, Turkish markets were one of the first to suffer a severe blow following the U.S. airstrike that killed a key Iranian general.

However, it appears some investors are looking past those vulnerabilities.

“It’s a challenging time for Turkey’s President Recep Erdogan. In the East, the veteran strongman is fighting Syrian/Russian forces to keep millions of refugees out of Turkey. In the West, he’s trying to disgorge some of the millions of refugees he already hosts onto a reluctant (to say the least) European Union,” reports Craig Mellow for Barron’s. “Domestically, he has restored economic growth after a punishing recession, but revived the inflation and current account deficits that caused the downturn in the first place.”

“Yet investors could be paid handsomely for entering this risky morass. Ten-year sovereign local-currency bond yields have jumped nearly two percentage points over the past month to 11.3%. Stocks have fallen 13% over six weeks. That looks like a good trade to some managers, for the moment,” according to Barron’s.

The $277 million TUR follows the MSCI Turkey IMI 25/50 Index and holds 43 stocks. TUR allocates 28% of its weight to financial services stocks and over 37% of its combined weight to industrial and consumer staples names, according to issuer data.

“Turkey’s resilient economy is also picking up steam, or was pre-coronavirus. Economists expect growth around 3% this year, from zero in 2019. What Covid-19 takes in tourist dollars it may give back through cheaper oil imports,” according to Barron’s. “The question is how long investors can enjoy 11%-plus interest before the next major disruption. Erdogan did not stay on the economic wagon long after the last one.”