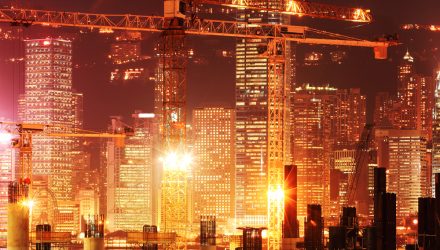 The fund is a tailored emerging market play that cuts out inefficient state-owned businesses. In regards to state-owned enterprises, government ownership can negatively impact the operational efficiency of a company. Government-owned and influenced companies typically run their businesses with a broader set of interests, appealing more to government wishes than generating the maximum possible return for shareholders.

For example, China state-owned companies may be targeting full employment to help the citizens’ cost of living at the expense of shareholders. Over time, these influences can lead to quite large but fairly inefficient businesses, and they may have the potential of stagnating the long-term growth potential of these companies.

How Do SOEs Stake Up?

If shareholder returns and fundamentals such as return on equity (ROE) are not the top priority of these SOEs, it would be seen in things like greater risk or lower overall performance. According to WisdomTree data, non-SOEs generated an average 10-year annualized return of 14.2%, compared to SOEs’ 1.4% average 10-year return. Over 1-year ended December 2020, non-SOEs generated a 33% return, compared to a -6.7% return among SOEs.

If SOEs are being mismanaged in ways that do not put shareholders’ interest first, it would show up in some fashion through either “lower quality” or “less efficient” fundamental metrics. One way to highlight this would be to view some of the fundamental metrics across time, such as return on assets (ROA) and ROE. The non-SOEs have had a distinct advantage since 2007, and the difference between SOEs and non-SOEs also appears to be widening during the most recent time frames.

Searching for more innovative exposures, watch the rise of “new economy” sectors among non-SOEs. Looking at the MSCI China Index, growth of the Information Technology and Consumer sectors over time has contributed to increased weights of non-SOEs. It is no coincidence that these“new economy” sectors have been among the key drivers of broad EM returns and overall growth of the market, as some of the more traditional, “old economy” sectors, such as Energy and Financials, have lost market share and continue to be the largest sectors of SOEs.

Securities that are noncompliant with international norms and standards, such as the Global Standards Screening (GSS) guidelines or are involved in Controversial Weapons, Tobacco, or Thermal Coal activities, as identified by 3rd party ESG data providers, will be removed from CXSE’s underlying index.

CXSE already has an ESG tilt given its focus on governance. The additional ESG screens, therefore, will have a minimal impact on the overall portfolio. As of January 19th, 2021, no securities will be removed from the WisdomTree China Ex-State-Owned Enterprises Fund, as the constituents of the Index tracked by this fund already meet the specified ESG criteria.

Listen to the full podcast episode on the HART ETF: