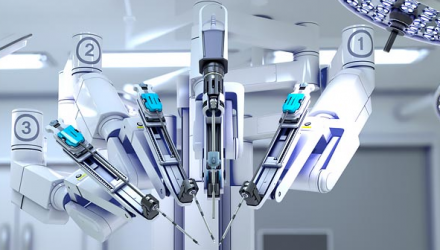 Medical Robotics Market Continues to Soar for Investors, But Patients Are the Biggest Winners

By Bill Studebaker via Iris.xyz

On Tuesday, Orian Research released a report on the current state of the healthcare robotics market growth. Their estimates may surprise even those who are focused on this sector. In brief, the growth to come is expected to be nothing short of explosive: the current market of $4.12 billion is expected to reach $13.9 billion by 2023. That’s a compound annual growth rate of 27.53% over the next six years.[1] It’s stunning.

What may be even more surprising is that, historically, analysts have far underestimated the true growth potential for the medical robotics market. Just look at Intuitive Surgical. Back in 2003, analysts called the company’s stock overvalued and warned investors that buying shares at a price tag of just over $5 was a risky proposition. Today, Intuitive Surgical is hovering at around $370 per share. More so, some analysts are predicting that the company is still in its infancy even today. In response to recent earnings releases, analysts at Goldman Sachs and Wells Fargo upgraded their targets for the stock to an almost shocking $1,000.[2]

Intuitive Surgical has a virtual monopoly on surgical robotics with its da Vinci Xi®system which uses 3D vision and intuitive motion to support minimally invasive procedures and help surgeons deliver better outcomes at a lower cost. In terms of the ROBO Global Robotics & Automation Index Classification System, Intuitive Surgical is considered a “pure-play” or bellwether company in the industry—a well-established leader whose core business is directly related to robotics and automation and that typically operates on a global scale. But Intuitive is certainly not alone in its efforts to push the boundaries of healthcare robotics, an area that has quickly become the new hotbed for the application of robotics, automation, and artificial intelligence (or “RAAI”) attracting investors to the theme.