You are at:Home»Leveraged & Inverse Channel»Volatility ETFs Spike on Growing Fears of a Recession 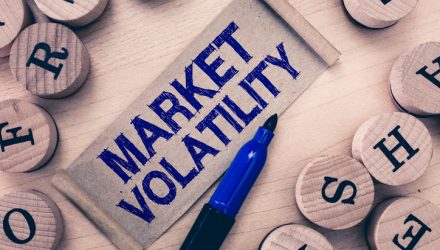 Volatility ETFs Spike on Growing Fears of a Recession

Volatility typically rises when stocks pullback, so owning volatility is seen as a type of market insurance. The VIX is a widely observed indicator for investor sentiment in the stock market and measures the expected or implied volatility of large-cap stock options traded on the S&P 500 index. ETFs that track VIX futures allow investors to profit during rising volatility or hedge against short-term turns.

Sliding bond yields and the Inversion

Fueling volatility this time around, sliding bond yields and the inversion of a key part of the U.S. yield curve on Wednesday for the first time in 12 years reflected fixed-income traders’ gloomy outlook and fears of a recession.

U.S. government bond yields have been slipping in recent weeks after the Federal Reserve embarked on its first interest rate cut in over a decade, rising uncertainty over the U.S.-China trade war and a global growth slowdown.

It all culminated with the yields on benchmark 10-year Treasuries dipping below yields on 2-year Treasuries for the first time since 2007 on Wednesday. A yield inversion is widely seen as a sign that the economy is heading into a recession. The U.S. curve has inverted prior to every recession in the past five decades and only showed a false signal just once in that period.

“We look at 2s/10s and the yield curve in general as long leading indicators,” Jeffrey Cleveland, principal and chief economist at investment management firm Payden & Rygel, told Reuters. “Long because a long period can elapse between inversion and a recession. For example, 2s/10s inverted in December 2005 and the recession did not begin until December 2007: a full 24 months.”