You are at:Home»Leveraged & Inverse Channel»Shiller: Trump Has Brought Back Big Feeling Of US Confidence 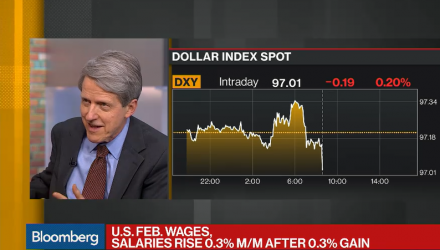 Shiller: Trump Has Brought Back Big Feeling Of US Confidence

Robert Shiller, Yale University professor of economics, and Burns McKinney, Allianz Global Investors portfolio manager, discuss the yield curve and how it could predict the future of our economy and the retirement of Wells Fargo CEO Tim Sloan. They speak on “Bloomberg Daybreak: Americas.” (Source: Bloomberg)

Robert what’s your take on the consumer is that we’re in danger zone or is this sort of like a short term blip in the weakness that we’re seeing.

Good question. I think that it’s a psychological phenomenon that it’s hard hard to predict. It’s been strong. I think it has something to do with her politics with Donald J. Trump who models conspicuous consumption. Who who wrote books saying you got to show off a little that was his advice to everyone seeming you know actually wrote the American way the American way. Of the American way or the American dream that comes and goes. You know sometimes it’s like any person. There are moments when you’re feeling confident in moments when you’re not. So Trump has brought back a big feeling of American confidence. For now it’s holding. Even now with the Miller news it’s gotten a little stronger.

Spending is one thing and that has to do with confidence and people wanting perhaps to show off a little bit for their friends. Personal income though is not something that is sentiment driven in the same way. And that came in lighter than expected. I find that interesting because it really goes to the question of what are we to see wages increase meaningfully enough to give that extra boost to this economy.

Well this is an old theme that wages. This goes back to Franklin Delano Roosevelt. He wanted to see wages pushed up. Because he thinks that will be the source of expenditure and. Verses. But now we’re kind of coming to the. Almost to the point of setting a record expansion for the overall economy. The NBER numbers will show that we are in the longest expansion ever if we’re still growing by June of this year. So I think that there is a lot of people feeling a little bit precarious. We have a long stock market bull market and that we have a long expansion. A lot of people are thinking this is a force that I think affects people’s decisions whether to invest in a new house or or renovation or things like that.

Right. So this idea that people are getting pessimistic just by virtue of how long this has gone on this has definitely been a theme this year. The question is we are not getting inflation right. And this was sort of underpinning the Fed’s incredible dovish tilt recently. And my question is if we don’t get inflation does that make this cycle that much more precarious. And I’m talking about inflation and wages I’m not talking about higher gas prices I’m talking about people actually earning more if we do not get that. Does that sort of create a limit for how far this could go given how much credit has been created. Well if the wage numbers. Show weakness that will bolster views that we are.

Late we were overdue for a recession. So I could see a scenario where a recession gets stronger. It wouldn’t be a surprise at all if we had another recession in the next before 2020. That will matter a lot for some people including the presidential election. And it could definitely happen. It’s hard to forecast these things because I think it’s forecasting people’s gut feeling about the future.

On the flip side though as you mentioned you know going into an election would be really hard for me to see President Trump letting the economy get into a recession ahead of the election. So talking about psychology and sort of helping to prop up the market can the expansion actually go on for maybe longer than anybody really thinks.

Well I don’t know what you mean. What can Trump do to boost the confidence here he’s been doing it.

He can talk infrastructure you can talk about an infrastructure bill Egan talking about stimulus more tax cuts more permanent tax cutsetc. I mean could that actually help prolong the confidence boost the market and economy. He has to get cooperation from Congress or the Fed and it’s gotten to be such a fractious atmosphere that. It.

Is hard to predict right now. I think this is one of the hardest times for forecasting to work because it involves a change in our national makeup. And a new emotion is playing strong the emotion of anger that affects consumption decisions and investment decisions as well.

So you started talking earlier about how this fear of another downturn has really driven sentiment in investing decisions to a large degree. Is there any area where it has not where there has been exuberance that you think could lead to some problems down the road.

Well it’s not it’s not like the year 2000. That’s when I wrote my book Irrational Exuberance. And it’s not like 2007. In that doesn’t it. Talk is more political and less economic now. But it does look like markets are. Are. Kind of fragile late stage exuberance in the stock market and the housing market and there are there are these signs of well. Last year we had two big drops in January and then. The drop that ended on Christmas Eve if you remember oh I remember that. So there is there’s a sense of fragility there. And similarly with with the housing market which is starting to slow down. So there could be if everyone is trying to judge what other people’s confidence is and there could be there could be a turnaround there could be some. News story that is. Pinned to this and then people think that this is the turning point.