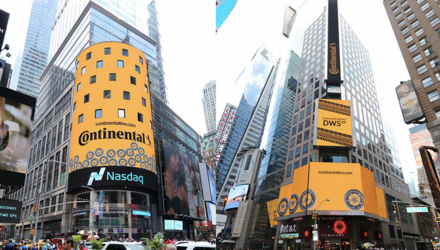 By Zac Mannes via Iris.xyz

We generally chart the regular NASDAQ — the NDX, QQQ, and the futures — but when you consider that a mere five momentum names, affectionately given the acronym “FAANG,” comprise nearly 40% of the weighting of the entire index, a glance at the Equal Weight version is not a bad idea. I prefer the First Trust QQEW [NSD] –$63.56 to the Direxion QQQE [ARCA] – $47.37 as it seems to chart slightly cleaner and the “EW” is easier to remember.

Watching for nuanced differentiation in the patterns between the QQEW and NDX, it is possible to see the potential for the former to lead a bit. For example, back in August/September of 2018, QQEW marked a divergent high. More recently, the QQEW began to count more like the blue 5th wave extension of (5) of Primary Wave 3 before the NDX shifted from it’s “(B)” wave.

Ford is less enthusiastic. The tariffs cost the car maker $750 million in 2018.

More importantly, though, is that fact that the Equal Weight does not get pulled to such price extremes by the disproportionate momentum of a scant few stocks. The Primary Wave 3 in NDX has stretched all the way to the 223.6% Fibonacci extension as measured in log-scale off the July 2010 low for Primary 2. By contrast, the QQEW hit a more perfect 161.8% Fibonacci extension for it’s Primary wave 3 top.

The disproportionate extension, though, also appears to affect the downside corrective moves. The Primary Wave 4 for NDX can easily be an approximately -40% slide into 2020, while QQEW can be a bit less severe at only -30-35%.