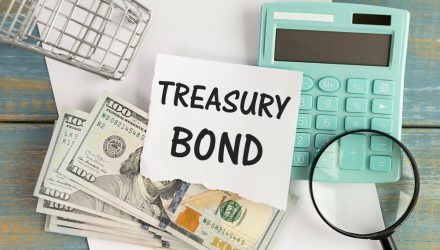 Investors Are Diving Back Into Treasury Bond ETFs

Among the most popular ETF plays over the past month, the iShares 20+ Year Treasury Bond ETF (NASDAQ: TLT) attracted $2.2 billion in net inflows, the SPDR Barclays 1-3 Month T-Bill (NYSEArca: BIL) brought in close to $2.8 billion, and the Vanguard Short-Term Bond Index Fund ETF Shares (BSV) saw $3.1 billion in inflows, according to VettaFi data.

According to Refinitiv Lipper data, investors have funneled a net $20 billion into mutual funds and ETFs that focus on U.S. Treasuries over the four-week period ended May 25, the largest inflows over four weeks in records going back 29 years the Wall Street Journal reported.

Individual investors even put $928 million into two-year notes at a recent government-debt auction, the most in over 15 years, selecting individual bonds partly to minimize management fees. Many have also targeted the government’s inflation-linked savings bonds, which now pay an initial interest rate of 9.62%.

This sudden interest from individual investors in government bonds is particularly notable since the bond market has suffered through one of its worst years ever in 2022. Bond prices plunged alongside the equity market, providing little relief as a portfolio diversifier this year, after the Federal Reserve’s aggressive monetary policy tightening measures to grapple with decades-high inflation rates.

Allan Roth, a financial planner with Wealth Logic, noted that people “run to safety” and buy I bonds as “low-hanging fruit” given their attractive interest rates.

Looking ahead, Wall Street analysts have mixed outlooks for government bonds. Most anticipate that short-term rates will continue to push higher as the Fed proceeds with multiple interest rate hikes. However, many are uncertain over whether the Fed will be forced to raise rates higher than many expect to completely get a handle on inflation, which could further drag down bond prices.