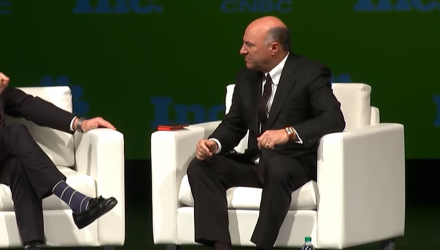 CNBC’s “Shark Tank” judge and Canadian businessman Kevin O’Leary certainly understands what’s required in order to be an entrepreneur after launching Softkey Software Products in 1983, building up the business in his basement and then selling it 16 years later to Mattel Toy Company for $3.7 billion. What’s the key component that defines an entrepreneur from an employee?

O’Leary says it’s freedom–how much an individual values it and how bad do they want it.

“The way to look at it is freedom,” said O’Leary. “How important is freedom to you later in life. If it’s very important, try the entrepreneurial path.”

The impetus for these entrepreneurial endeavors once again ties back to freedom. It’s the short-term sacrifices of putting in the insurmountable hours of work in order to attain the long-term goal of freedom down the road.

“The reason you do it is to provide freedom later in life–freedom in a way that no employee ever gets because when you’re an employee, you work for someone else,” said O’Leary.

O’Leary’s view comes as the U.S. is currently in a strong labor market. Earlier this month, the Labor Department said job growth in March made a comeback following a less-than-stellar February as 196,000 jobs were created as opposed to 175,000 expected by economists.

As such, O’Leary doesn’t view being an employee as something to denigrate.

“It’s not a bad thing,” said O’Leary. “Being an employee, particularly a good one, allows you for free time on weekend or to go to baseball games for your kids or to do things during your two to three-week holiday that no entrepreneur ever gets, particularly when they’re working so hard.”

Out of that labor force, however, there will be a number of those who will eventually put freedom at the top of their priority list and become an entrepreneur–among other reasons–if they’re willing to make the necessary sacrifices.

“About a third of the people out there become an entrepreneur in the workforce,” said O’Leary. “They want to work for themselves. It’s all about how your see yourself in the future–are you willing to sacrifice your family life in your 20s and 30s–you’ll have no free time and you’re willing to work 25 hours a day, eight days a week, then you’re an entrepreneur.”