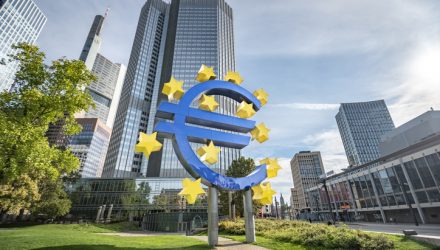 U.S. markets and stock exchange traded funds retreated Thursday after earnings disappointments hinted at a slowing economy and as the European Central Bank’s comments missed the mark with investors whom were looking to more aggressive action to prop up the Eurozone.

European Central Bank chief Mario Draghi’s argued that the risk of a recession in the Eurozone was “pretty low” and that policymakers did not discuss rate cuts at the recent meeting, but they were open to interest rate cuts in the future, Reuters reports.

Draghi signaled the ECB may follow a looser monetary policy if inflation continues to fall short of target levels.

“Risk markets have completely reversed the initial exuberance, which is likely due to the lack of details in Draghi’s press conference,” Mohammed Kazmi, portfolio manager at UBP, told Reuters. “We are used to Draghi delivering a dovish message, which meant that the bar was high for risk and rates markets to rally further, given pre-positioning into the meeting.”

Investors have increasingly bet on global policy makers to step into prop up the slowing global growth.

“We see evidence that the global economy is in a slow-growth mode with weakness in Europe, Japan and emerging markets,” Terry Sandven, chief equity strategist at U.S. Bank Wealth Management, told the Wall Street Journal. “That provides support for central banks around the world to continue with a dovish easing policy.”

Looking ahead, investors will be able to predict a clearer picture on the Fed’s monetary policy outlook on Friday when the Commerce Department releases second-quarter growth data.

Technology stocks dragged on the markets following Xilinx Inc’s pessimistic forecast after the chipmaker revealed pressure from the U.S.’s restrictions on selling to Huawei Technologies.

Another notable earnings season miss came out of Tesla after the electric carmaker peddled back on meeting its profit outlook.

“Earnings have been mixed and it points to an already slow global economy and a slowing U.S. economy,” Peter Cecchini, managing director and chief market strategist at Cantor Fitzgerald, told Reuters.