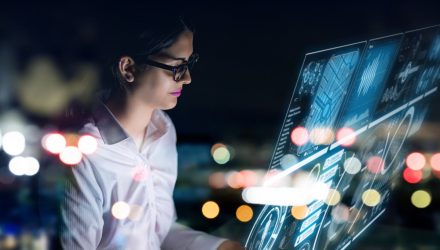 Communication services sector-specific exchange traded funds were among the worst hit Tuesday after Google’s parent company, Alphabet (NasdaqGS: GOOG), experienced its worst day in a decade in response to its slowing growth.

The divergence indicates investors are favoring faster-growing companies with more stable revenue gains as the global economy begins to slow in the late business cycle.

“It is rightly being compared to the other large digital companies,” Christopher Rossbach, chief investment officer at J. Stern & Co., told the WSJ. “A 5-10% reaction on numbers that have come in below analysts’ short-term expectations is normal, especially for a stock that has done as well as it has.”

Alphabet posted revenue of $36.3 billion for the first quarter, or $1 billion short of expectations. The numbers also mean that the company saw a 17% increase from the same quarter a year earlier, or the slowest growth since 2015.

Additionally, the internet giant’s margin slipped to 18% from 25% a year earlier partially after a $1.7 billion fine from European antitrust regulators in March for limiting how some websites display ads sold by competitors. Excluding the antitrust penalty, the company’s margin was 23% and its per share earnings were $11.9 a share, which reflected steady profitability.

“We are still very positive on it for the long term,” Rossbach added. “We think it’s growing very healthily for a company at the scale that it has.”