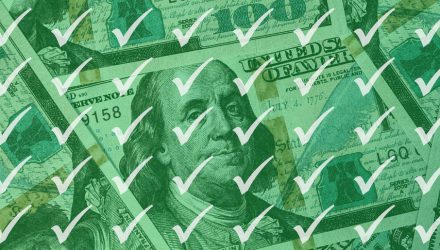 Infrastructure sector-related exchange traded funds climbed Tuesday on speculation that the Trump administration is prepping a $1 trillion infrastructure package focused on transportation projects as a way to strengthen an economy ravaged by the coronavirus pandemic.

Among the best performing non-leveraged ETFs of Tuesday, the Global X U.S. Infrastructure Development ETF (PAVE) gained 3.5% and the iShares U.S. Infrastructure ETF (Cboe: IFRA) rose 2.7%. Both ETFs crossed back above their long-term resistance at the 200-day simple moving average, with IFRA trading at close to 12x its average daily volume.

The Department of Transportation’s preliminary plan will set aside the most funds for projects such as roads and bridges, but it will also set allow for about a quarter of the money to pay for priorities like 5G wireless infrastructure and rural broadband, Reuters reports.

The White House is expected to make further details on the projects in July, according to sources. The breaking news of another economic stimulus measure helped support the broad U.S. market rally on Tuesday.

Some also pointed out that this may be a political ply from President Donald Trump who will be running for re-election in November. He is eager to stimulate growth in a beleaguered economy to strengthen his political prospects after being censured for the way he handled the COVID-19 outbreak and the response to protests in the wake of the death of a black man in police custody.

The White House could propose an extended 10-year reauthorization of the measure, which would be the longest-ever surface transportation bill. The administration is likely to release its proposal as early as next week.