You are at:Home»Investing»In The Know: the Advantages of Fixed-Income ETFs in a Changing Market 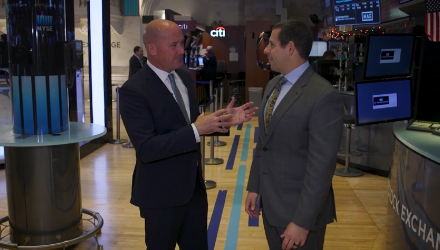 In The Know: the Advantages of Fixed-Income ETFs in a Changing Market

“Shares are created. Yes, bonds are moved during the creation process, but then they’re out in the market, and there’s this extra layer that’s now been added. You and I can trade with each other,” Yones said.

Furthermore, in addition to the extra layer liquidity, ETFs will also have tax advantages built in. The ETF is often praised for their tax efficiency since they use an in-kind exchange with an authorized participant, which means an ETF manager uses an exchange to sell the basket of stocks in a fund.

This allows the authorized participant to shoulder the impact of capital gains taxes while a mutual fund must sell stocks in order to cover redemptions. This creates a scenario where the fund pays capital gains taxes that are passed on to the investor.

“We’ve already talked about the fact that a fixed income as adds an extra layer of liquidity. They add a nice tax efficiency where the creation redemptions can help to remove some tax ability on the fund structure,” Yones added.

Just like it’s important for a stock investor to know a company’s fundamentals, such as its revenue, earnings and expenses, an ETF investor wants to know what holdings that particular fund comprises.

Compare this to ETFs, which provide daily disclosure so the investor knows which holdings the fund has, giving it an added layer of transparency over mutual funds. This also applies to prices where ETF investors can simply obtain accurate pricing from the exchange where the ETF trades.

“They (ETFs) provide intraday pricing,” said Yones. “You know one of the things we don’t always talk about anymore with ETFs is when the markets are volatile like we saw in the 4th quarter and people do want to express the ability to get into or out of the markets intraday, when we’re seeing intraday swings, the ETF allows for that, versus a fixed income mutual fund where you’re really just buying a NAV at the end of the day.”

At the New York Stock Exchange, the focus is on more transparency and expediency, such as the publishing of closing prices. The NYSE is using the help of mathematical algorithms so that investors and issuers alike know the exact price of an ETF at a specific time.

“Now we get an ETF and we’ve got a basket of bonds trading real time, pricing real time on our screen,” Yones said. “We know exactly what it’s worth. So a lot of times in the industry we’ll say, ‘Boy, ETFs have actually created transparency in what was really an opaque market.'”