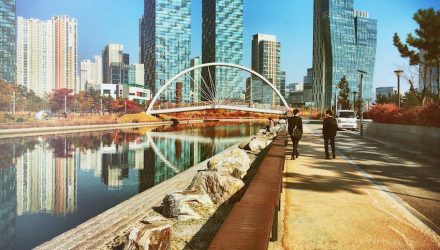 How South Korea is Critical to The Global Economy

Economic integration, which ballooned in the mid and late 20th century, has provided consumers with many more alternatives than they ever had.  Trade between continents increased with the creation of the World Trade Organization and bilateral and multilateral trade agreements between nations and economic unions.  However, as the current geopolitical climate shifts, the rise in international tension in Korea creates a conundrum for the global economy, and raises the crucial question – what would be the global impact of heightened escalation in Korea?

To answer this question, we need to look at the South Korean economy and its role in global trade, especially the production of electronic products, vehicles, and steel.

A key player in global trade

South Korea plays a vital role in global trade, much like China and Japan.  Nine of the world’s ten most used container ports are in Asia, with the port city of Busan, South Korea ranking number five on the Forbes’ Top Ten World Container Ports list.  As a result, the country is a top exporter, ranking fifth among the largest export economies in the world, according to the Observatory of Economic Complexity (OEC).