You are at:Home»Equity ETFs»Healthcare ETFs Lag Markets as Celgene Drags 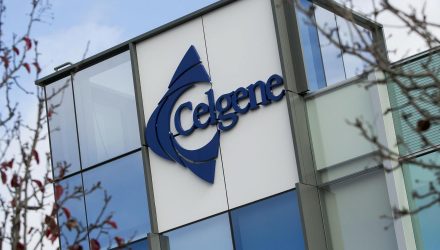 Healthcare stocks and healthcare ETFs were among the worst performing areas of the S&P 500 Monday as Celgene (NasdaqGS: CELG) shares plunged in response to Morgan Stanley’s projecting that a key experimental drug could be delayed.

Celgene shares dropped as much as 6% earlier Monday after Morgan Stanley argued that the drugmaker’s experimental multiple sclerosis drug, ozanimod, could be delayed by up to three years, reports Allison Gatlin for Investor’s Business Daily.

CELG is 2.2% of XLV’s underlying portfolio, and it is the largest underlying component in IBB at 8.5%.

Why Ozanimod Could Be Delayed

Morgan Stanley analyst Matthew Harrison said argued that the holdup for ozanimod, an investigational multiple sclerosis drug, is due to converting the amounts used in preclinical studies in rats and monkeys to human-size doses.