You are at:Home»Featured»Health Concerns Over Vaping Escalate As Walmart Pulls E-Cigarettes From Shelves 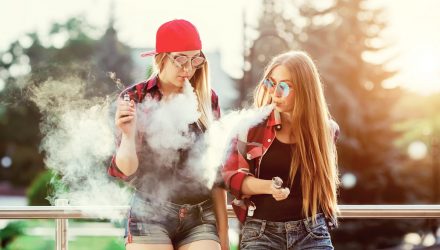 Walmart, the world’s largest retailer, will pull e-cigarettes from its Walmart and Sam’s Club locations in the U.S. amid “regulatory complexity” and “uncertainty” circulating the industry, the company said in an internal memo Friday.

Walmart is the latest to retract from the industry, with federal regulators warning they will shortly ban flavored e-cigarettes, while some nations have outlawed the products altogether, saying they pose too large of a health risk.

At least eight people have now died from a mysterious lung illness which doctors believe may be caused by vaping. The ailment has become a rising public health concern that has U.S. and state officials perplexed, the Centers for Disease Control and Prevention said recently. Federal health officials have been urging people to avoid using vaping devices amid of string of illnesses across the country.

“Given the growing federal, state and local regulatory complexity and uncertainty regarding e-cigarettes, we plan to discontinue the sale of electronic nicotine delivery products at all Walmart and Sam’s Club U.S. locations,” the company said in a memo to local managers. “We will complete our exit after selling through current inventory.”

While e-cigarettes have been touted as a more salubrious alternative to traditional smoking, U.S. health officials now blame vaping for leading to a mysterious lung disease that’s sickened roughly 530 people. Health officials have not been able to identify one specific brand or substance as the cause. Many patients reported using THC, the compound in marijuana that produces a high, others have used both nicotine and THC, while some patients claim they only vaped nicotine.

Despite Walmart’s move to stop selling cigarettes, the American Vaping Association admonished the monster retailer for continuing to sell traditional cigarettes while pulling e-cigarettes from its shelves.

“You know you are in the middle of a moral panic when big corporations like Walmart find it is easier to sell deadly combustible tobacco products than to sell harm reduction alternatives,” the industry-funded group’s president, Gregory Conley, said in a statement.

Investors who are concerned about the effects of vaping and tobacco in general could consider healthcare ETFs like the iShares Nasdaq Biotechnology ETF (IBB) or the Vanguard Health Care ETF (VHT), while those who would like to invest in rising tobacco technology trends could consider the Consumer Staples Select Sector SPDR Fund (XLP) or the iShares Global Consumer Staples ETF (KXI).