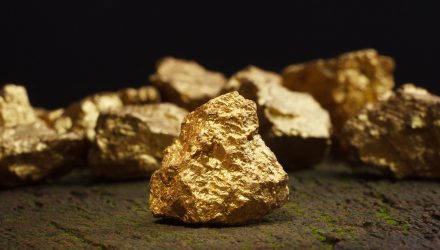 The gold market rally has pre-empted the recent stock decline of the last few days with gold breaching $1,400 an ounce and continuing its run. Gold is up another $9 and change today, trading around $1,423.50 an ounce.

Gold prices continued their charge toward a six-year high on Monday, with fragility in the U.S. dollar and 10-year Treasury yield, forecasts for lower interest rates among global central banks and geopolitical fears all contributing to safe haven demand for the precious metal.

“This market looks like it will tend to grind higher from here on the back of cheaper money, while yields continue to erode. The trend is your friend, and gold’s trend is clearly higher,” he told MarketWatch.

What’s interesting about the recent gold run is that there has been some exceptional activity occurring, especially in the gold ETF, SPDR Gold Shares (GLD).

Trader Pete Najarian discussed the unusual activity on CNBC, saying, “There’s been 14 times in the month of June where we’ve had unusual options activity in GLD. It actually started the very last day of May when the ETF was still trading around 120 at the time. And they’ve just continued to buy, they’ve continued to roll, and so have we continued to do the same thing. I’ve just got out of my August calls today because of what I’m seeing in the unusual activity that’s hitting this morning. They bought 10,000 of the September 130 calls. They’ve been such size and they’ve been so right, that I’m gonna continue to follow that.”

Nejarian expressed that silver has also been the recipient of recent gains as well. The iShares Silver Trust (SLV) ETF is up over 10% since the beginning of June.

“It hasn’t been just gold. We had that Pan-American silver back on June. That’s absolutely exploded to the upside. That’s up $2 on the stock. Those options are already up 4-5 time what they were trading at the time. So it’s been precious metals, specifically in the GLD. And that’s been hitting time and time again, Nejarian explained.”